Hi Carl! Well, we’re started developing music software already in the late 80th on the Commodore C64 and continued on Amiga and PC. This software was mainly used to play music and effects in self-made games and demos. In 1995 we released a Wavestation-like software synthesizer for Amiga which was able to render synth-sounds ‘offline’ to use them as wave files in music-players. “MolecularBytes” was introduced around 2005 with the release of a preview-version of an elastic-audio application.

Currently we are two people – me and my twin-brother André. Presets, graphics/interface, webpage, documentation and all the code and algorithms are currently done by our self. That’s sometime a hard job but really makes fun. It’s very interesting to be creative in different aspects of a software-development process.

You’ve released the brandnew amazing tool Atomic Transient. I’ve heard it’s unique and incomparable to other transient plugins. What’s that for a plugin, and what can be done with it? 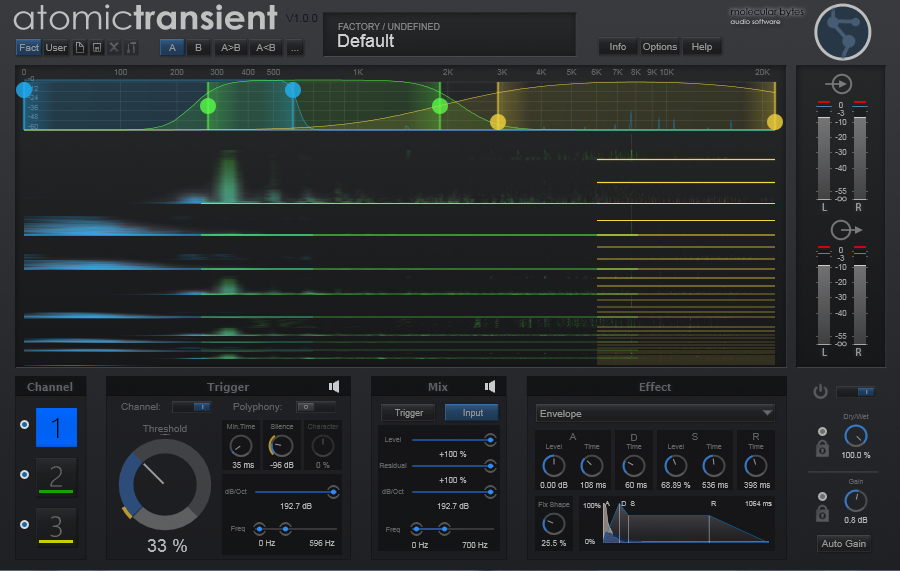 Hehe – if it’s “amazing” from the users point of view depends on everybody’s own expectation.
The basic idea of AtomicTransient is about 4 year ago and was something like “Don’t react on transients globally, but react on signal parts which defines or begins at transients”. And this is the difference to other transient plugins.

While conventional transient tools for example raises the attack of a drum-hit, all’s going well if this sound is the only one which is playing. But if more different sounds grab into each other – think about a mix where a smooth pad sound plays additionally to the drum-hit or drum-hits overlap because of a reverb – the raised attack will also affect the pad or reverb of other hits.
AtomicTransient detects new sound-events and perform the processing to only the intended parts while already running processing from earlier events still continue to be processed independently. So each sound-event has its own effect and time.
This also enables some nice features, because now it’s possible for example to ‘hide’ specific notes or raise sustain of a snare in a mix or of each polyphonic piano-note. The separation of sound also allows measuring the current envelope – and that allows AtomicTransient to change the whole envelope of a sound.

All that can be done with up to three different, independent channels with adjustable frequency range for detection and processing each – so AtomicTransient is a conventional transient-tool and also a multiband-transient-tool.

With which audio-stuff do I get the best results when I use Atomic Transient? Is it just for attacky percussive sounds, or could it also be used for elements like vocals? I mean not every plugin is suitable in every situation and for each instruments. 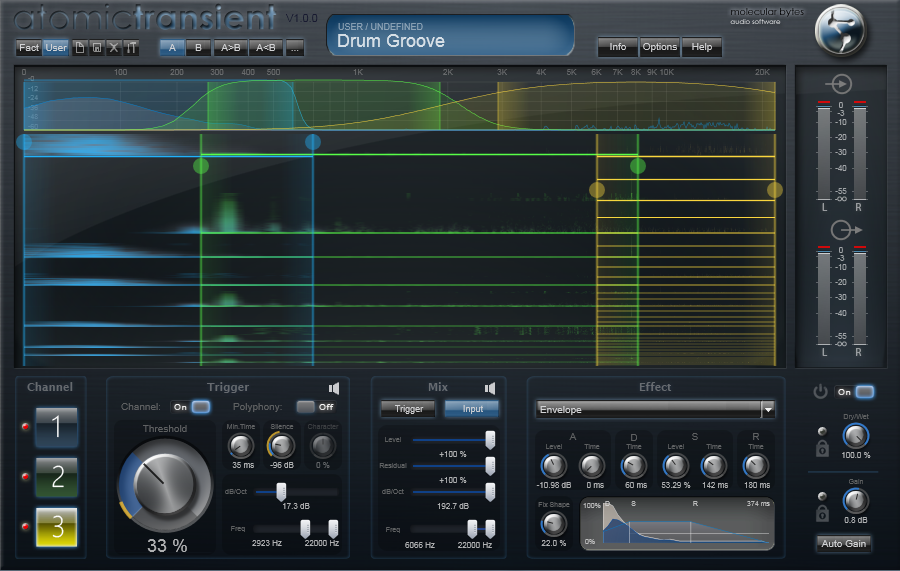 AtomicTransient works best on audio-stuff which have transients ;) Ok, seriously – what’s most important is that AtomicTransient can detect the wanted sound-events in your audio material – and this works well for any percussive stuff – monophonic or polyphonic. You have the ability to adjust the threshold and frequency range of your wanted sound-event – this makes sense if you’re using mixes.
Basically, all kinds of sudden sound-events can be detected – this includes a change of a note for example in single-instrument material like guitar, piano etc. in both polyphonic or monophonic mode.
But if you want to detect a smooth-beginning sound which overlaps frequencies of the hi-hat in the background will not work satisfactorily.

Beside the detection of sound-events, another important aspect is to keep the integrity of the sound when using the polyphonic mode. This defines the processing quality. AtomicTransient has a parameter to adjust this integrity between “I have a mix” to “I have a single instrument”.
On the other side, the monophonic mode works like conventional transient-tools but by supporting multiple channels with adjustable frequency range, it’s like a multiband transient-tool, but you can differ between detection and processing bands. It makes sense to process clear defined drum-patterns using this mode.

For vocals, AtomicTransient can be used to detect and process “pops” and “ess” for example to change them (a “De-Esser” preset is available).
For anything else in a vocal (for example splitting notes or words) AtomicTransient currently does not produce good results, because vocals are mostly not consistent enough. For example, you won’t trigger more attack on a vibrato, right? We have already some ideas improving this :)

But: AtomicTransient does no magic and should not be used to perform magic. It’s not guaranteed that any desired drum can be attenuated or removed, and if – does it comply with the users expectation?

Is it better to use AtomicTransient in a recording session or in a mixdown process or should it be used for post-production?

Well, it depends. Using the plugin when playing a guitar live can make sense, but I would assume it’s better to make adjustments at mixdown or post-production time.
AtomicTransient can be used for subtle or strong corrections, changes or as an effect.

How is it possible to filter or recognize transients of a multi-channel recording? Can you explain the technique or algorithm engine behind that tool a little bit, please?

I think the basic technique is already described above. Transient sounds are normally introduction parts of a following sound. Some instruments have such transient sounds or completely consist of them, other sounds simply beginning without a transient sound. A violin for example has normally no transient – but there’s a time-point where it begins. We define any “beginning” of a sound a ‘transient’. Somewhere there’s energy on a frequency which was not there before. AtomicTransient observes all running sound-events all the time and follows complex rules to keep the integrity.

You’ve got also another product – Atomic Reverb. Will there become an upgrade like version 2 in the next time or which interesting products could we expect next from MolecularBytes?

AtomicReverb was our first commercial product. We still have improvements and nice features on the list, but whether we will release a major update “Version 2” or simply add them from time to time to minor versions is not defined yet.
Our main work beside plugins is done on our elastic-audio application which has been grown to a huge project with a lot of complex algorithms and analysis stuff.
A next plugin-project is currently not planned – but the list of ideas is growing ;)

I’ve heard you’ve got a nice give-away competition for our Noizefield readers, right? What can you say about that?

Yes! Among all FB-comments of the Noizefield’s AtomicTransient news post which reached within a month (till 30th August 2016) after the post we give one free copy of AtomicTransient to the randomly selected winner.

Do you or your team also play and produce music like DJing or playing in a band?

“Once upon a time” we played in a band. Drums and bass. Rock and Heavy Metal. Sometimes we play for our own for fun or mix some short parts in a DAW – but there’s not much time left for doing “cool” stuff.

Now let’s tell our readers something that you always wanted to say (this could be a funny anecdote, thankgiving words to your supporters, a secret about your company etc…)

We are always very happy if we get feedback for our products. As a developer, you cannot read from the users mind. So it helps a lot and we had some really nice conversations helping us to think about a better solution.
A really big help for users I think are demo/trial version of software to let the user test if the product feeds their needs. So I can recommend everybody who’s interested to download our trial-versions.

Thank you so much for taking time to this interview.

Atomic Transient –
Give Away

*This promotion/ give away is in no way sponsored, endorsed or administered by, or associated with Facebook. You understand that you are providing your information to the owner of this Facebook page and not to Facebook.

*Sponsor is offering a prize to one randomly drawn individuals who enter during the entry period.

*Winners will be notified by Noizefield.com typically within 3 week of the drawing. Prize(s) will be fulfilled by Sponsor.

*Limit one entry per person

*Sponsor and Noizefield.com reserve the right to cancel or modify this promotion at any time.

*By entering the promotion you agree that Sponsor and Noizefield.com, and each of their respective affiliates, will have no liability, and will be held harmless from and against any liability or loss, including reasonable attorney’s fees and costs, for all matters related to your acceptance, possession, experience with, use or misuse of the prize or participation in the promotion.