Welcome Max, nice to meet you here for the interview.
You’re representing the innovative plugin-company Audiomodern. Please introduce our readers, what Audiomodern is doing, and about the beginning of that company.

Audiomodern was founded and incorporated in late 2014 in Athens, Greece and currently net-working with many partners around the globe. Our philosophy is to create, and deliver custom tools for audio production and music composition.
Most of us come from a composer’s/producer’s background, others have PhDs, others have experience with record-labels but most of us are somewhere in the middle. we wanted to create unique tools, sounds and modules that are all made from an artistic side and with a creative approach. We have been growing very fast over the last couple of years and our team of musicians, professional sound designers and developers are expanding. We remain dedicated to the creative-process in order to put as much quality on each and every project as possible.

Audiomodern has recently released Atom. Please explain what people can do with this extraordinary plugin.

Atom is one of our best works to date and we have received a huge amount of positive feedback from users and professionals of many fields.
We believe Atom has quickly became a standard plugin to go when in need of really unique sounds, soundscapes, organic keys and otherworldly tones & soundscapes as well as special sound effects and impressive impacts for cinematic sound design and other media projects. One key fact is that a user can quickly create custom sounds that stand out, given that we focused on a really easy-to-work-with user interface. Possibilities are endless.

What can you say about the producing progress of Atom? With which equipment have you produced and recorded that huge sound library with 7,2 GB of sounds, and how did you get the ideas to create those sounds? 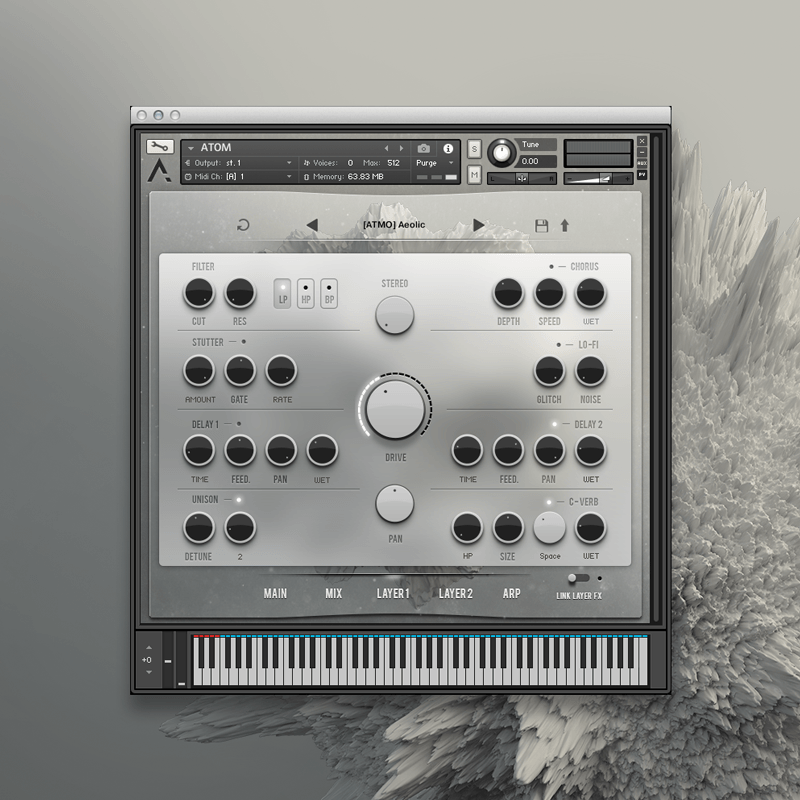 Atom took us more than two years of collecting sounds for this project, many months of coding for the plugin and a lot of time to finally blend the sounds together to create interesting presets.
We worked with many different equipment on this project both hardware and software. From custom made contact mics, custom made musical instruments, experimental circuits, and Max patches to top notch analogue studio gear, we even used malfunctioning gear and some WWII Weaponry as well.

Since day one the concept behind this instrument was to blend organic sounds and recordings with experimental synthetic sound design techniques to receive the most interesting and musical sounds.
The way we worked is basically the same on all of our projects, it required thousands of recordings and keeping only the 10%-20% that truly worth being available on the instrument.
We always aim to have the most out of every sound and to offer highly original and inspiring audio content. Every sound must be is as usable, fresh and musical as humanly possible.

So it seems Atom is a fantastic sound design tool for films, games and soundscapes. But you’re offering also much other products, even a lot of free instruments too? Let’s talk about your portfolio of the other instruments.

Yes, at the time we have released a wide palette of products, from Kontakt instruments to sample packs, Max-for-Live devices and even soft synth preset packs.
All of our instruments and packs are created with a specific scenario in mind. Most of them are loop player modules and are designed to work in a range of musical and sound design scenarios from electronic music compositions, cinematic sound design, to any media production.
Also, when is technically available we always offer a free/demo version of each release so everyone can test the material with no functional limitations before buying. 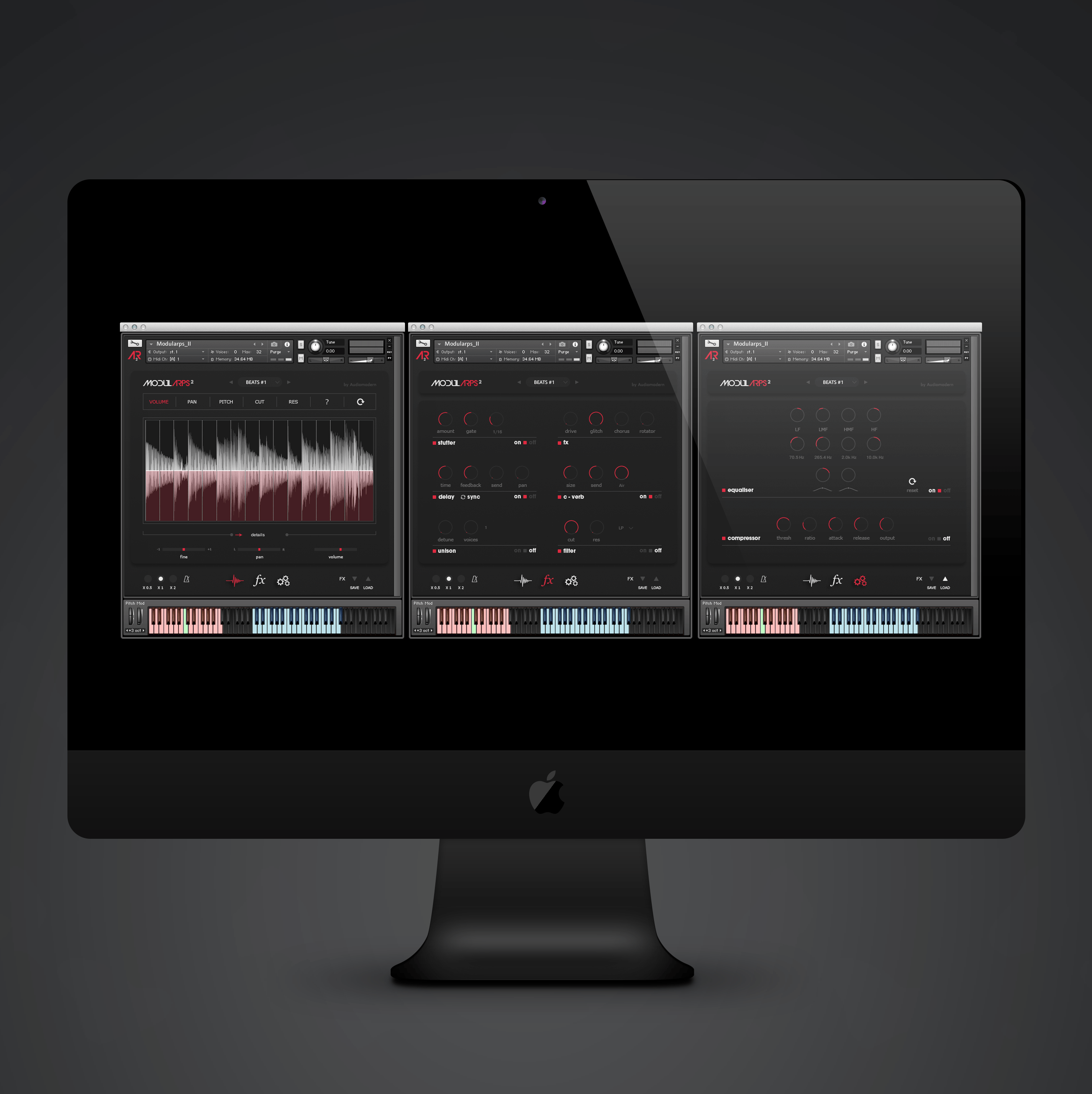 Additionally I’ve seen that you’ve released also very interesting samples and synth presets. They sound pretty good. Are you mastering the samples before you release a sound package (incl. the free ones) with outboard equipment?

Thanks, Some times, when needed, there is a large chain of equipment we use to tweak the sounds that range from modular system set-ups used as an FX device for tweaking the input signal to outboard analogue and finalizing gear such as an Elysia museq, an SPL 9530 Vitalizer, a Wave UBK Fatso to name but a few but i wouldn’t calle them “mastered”.
We quickly realized that most of our sounds are again thrown in a project/DAW and they get mastered/finalized later on so we do not see a point a sound should get “mastered” twice at the end. Some of the sounds run through the incredible Shadow Hills Mastering Compressor though :)

Mostly of your tools are Kontakt or Live rack instruments. Will there be also VSTs of them and is there a plan for an iOS- or Android-app maybe too?

Yes, we aim for our products to be usable in most platforms so VST/AU and iOS apps are formats we will focus in the near future.

Which kind of instruments and samples could we expect next?

At the time we work on several projects simultaneously, we have some Atom expansion packs on the making but also a very interesting and new project coming around December ’17.
Also, we are being part of a big new project in collaboration with a major company but I can not give you any more details at this point.

What’s the target audience for your tools? Are they suitable just for sound designers or for mixing engineers, film producers etc.. and do people need much previous knowledge to work with them?

We directly communicate with lots of our users each day and from what i understand most of them are music producers and sound designers , both beginners and professionals, that really search to take their sound a step further. We receive a lot of work from them that contains sounds from Audiomodern, music tracks, trailers or even T.V commercials. All of them point out how simple and easy to use are our instruments and packs. We pay much attention into creating super easy and self explaining user interfaces allowing deep and complex sounds to be built easily without fiddling, allowing the user to concentrate on what is most important – the music!

Now you’ve got the chance to tell our readers something that you always want to say:

We’d like to take the opportunity and thank our customers and medias alike for the overwhelming trust and support since day one.