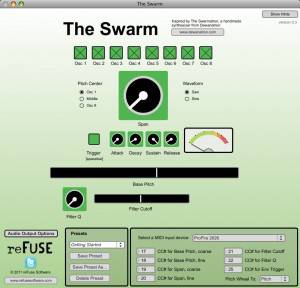 Inspired by The Swarmatron, reFuse released a free drone synth.

“The Swarm is based around a bank of eight oscillators that start out tuned in unison. Using the Span knob, you can continuously stretch out that cluster of notes from unison to, at the widest setting, evenly spaced harmonic multiples. Along the way, all kinds of dissonant tones and beat frequencies are created.”