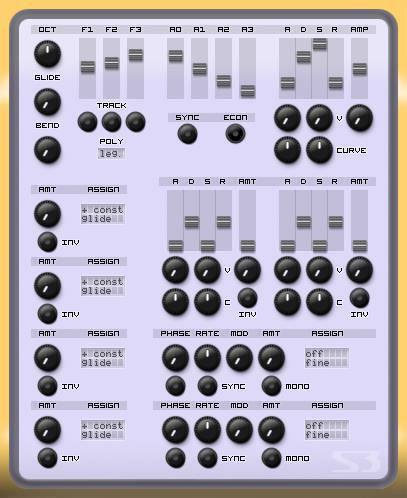 “it’s an abandoned oscillator i was developing for syng3. it’s similar to VOSIM in that it renders the formants instead of using filters. i thought it was kinda neat, under most conditions sound quality is very good, so i wrapped it for posterity.

there’s probably a few vst that do the same thing.. you get a sine fundamental and three formants. if the formants are at the same frequency as a harmonic (eg. integer multiple of the fundamental frequency) it produces a pure sine. otherwise you get a narrow spectral peak constituted from the closest harmonics.

i dropped it for two reasons: cpu is high for the advantage in quality, and it produces a dc offset at sudden pitch transitions, so it’s either necessary to use portamento, sequence a space between notes or use polyphony to avoid clicks. improving this would have resulted in 3-4 times the cpu of the old source>filter model, which also performs better when mixing the source with noise. “