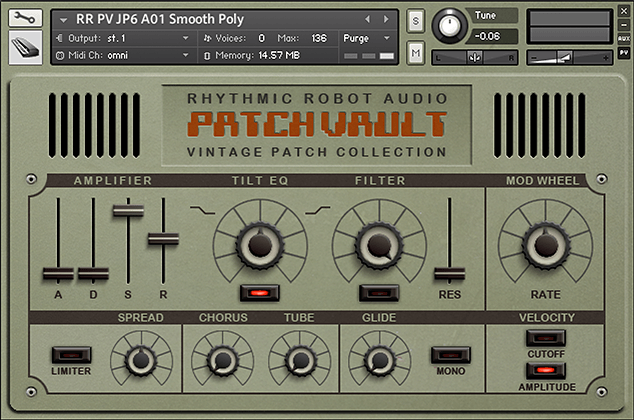 “PatchVault is an ever-growing collection of patches from the most coveted synths of the past. Taking original, authentic sounds from ancient hardware and wrapping them in a simple but powerful interface, PatchVault makes grabbing that sound a breeze.

The interface is geared towards hands-on, immediate tweakability. It features a neat little Tilt EQ, a powerful 4-pole filter, and can map MIDI velocity to both amplifier and filter cutoff, giving you playable expression that was uncommon on most of the original hardware. There’s Chorus and Tube Saturation to enhance the sound, plus a Limiter to tame over-enthusiastic analogue waves. All the modern additions can be easily switched off, though, if all you want is the original factory patch in its raw state.

This is a freebie taster so you can get a feel for yourself of how PatchVault patches might work in your mix. It’s the very first factory sound of Roland’s über-cool Jupiter 6 synth, so this is most likely the very first sound you’d have heard if you bought a J6 back in the day. If you like this, keep an eye out for the entire Jupiter 6 soundset, which will be coming very soon”