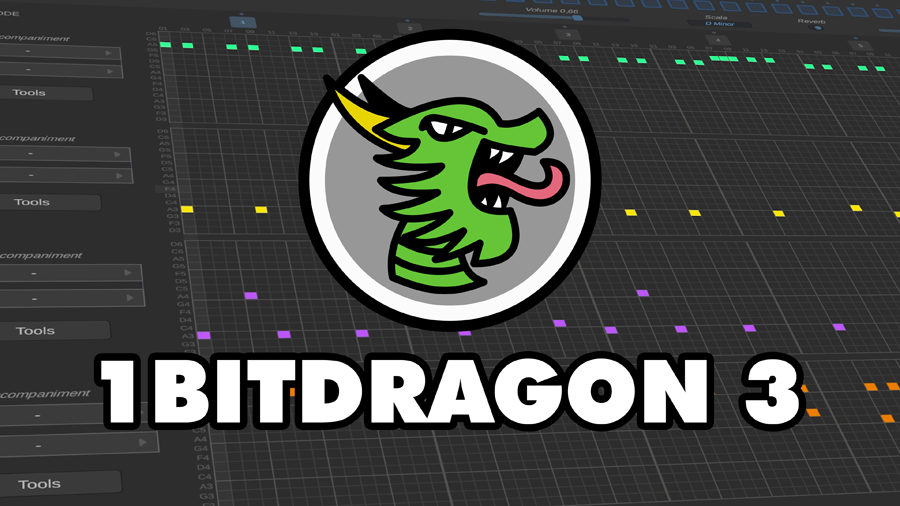 After a year in the making, 1BITDRAGON 3 was released today for Windows, MacOS, and Linux. You can get it at https://1bitdragon.itch.io/1bitdragon for $20.

“1BitDragon is here with one of the most approachable music trackers I’ve ever seen. Doodle some shapes on the piano roll and the dragon will do its thing. There are nearly 200 instruments in here with almost as many drum samples so you can make a ton of music across a bunch of genres without having to get outside of 1BitDragon. If you’ve ever been too intimidated to start making music, this is a great place to start.” (itch.io)

“1BITDRAGON is a simple sequencer and melody creator capable of doing the composition work for you. Within minutes (there are good videos of this) a user can pick out instruments and patterns, mix them to their liking, and create decent, fairly natural-sounding tracks in electronic and chiptune styles. The tracks I listened to would be great additions to a wide number of game projects, videos, podcasts, etc.” (codewriteplay.com)

“It surprised me how easy it was to make something that sounded good without even knowing what I was doing. There are many options to it, it’s simplified so it’s not overwhelming, you “paint” to place the notes (like in a lot of music tools). I button mashed, but still got something that sounded impressive. There are many music tools out there. 1BITDRAGON is one that simplifies it enough to make it welcoming to people that don’t understand the finer workings of music authoring. ” (Nathalie Lawhead, winner of the Indie Games Festival 2015 Nuovo Award)

“1BITDRAGON takes grid-based or matrix sequencing to the extreme with every track represented as a grid ready to be patternised. It’s fast and brilliantly simple. I like the way you can see all the notes of every track and rhythm on the screen at the same time – not something you get in most DAWs. As it is it’s $20 for a fun bit of grid-based music-making that could be really useful.” (gearnews.com)