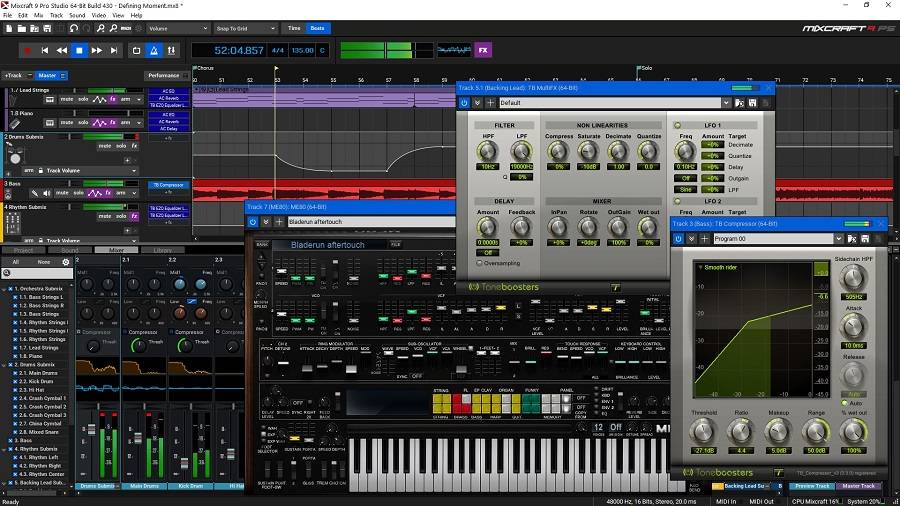 Acoustica released Mixcraft 9. It’s a true labor of love, built for musicians, by musicians. From its slick, modern interface, to its incredibly powerful new effects, instruments, and features, we’ve upgraded nearly every aspect of Mixcraft, with new visuals, new sounds, and more power than ever.

Created by musicians, for musicians, Mixcraft is unrivaled in the industry for its ease-of-use and raw power. Record and mix your tracks to perfection, in record time, with Mixcraft’s incredibly intuitive interface, lightning-fast sound engine, reality-defying pitch-shifting and time-stretching technology, and nearly-universal support for third-party plug-ins, audio interfaces, and hardware controllers.

New visuals, detachable panels
Featuring our sleekest and most flexible interface yet, Mixcraft 9’s workflow remains the fastest in the industry. Panels through the software can be detached and positioned around your screen, and the transport is now undockable as well, and can be moved to the top of the interface.

Vocoder Tracks
Vocoders, which turn your voice into robotic sounds, are found everywhere in today’s dance, pop, and electronic music. Our groundbreaking new Vocoder Tracks make it easy to add vocoder sounds to your projects with a single click.

New Effects and Instruments
You won’t believe the quality of Mixcraft 9’s new plug-ins, from Toneboosters, Cherry Audio, and Acoustica.

Advanced Plug-in Automation and Control
Plug-in parameters can now be controlled by MIDI, side-chained to audio, and modulated by tempo-synced LFOs, all from a new, streamlined interface.

Mixcraft 9 Pro Studio can convert any monophonic audio clip into MIDI with a single click, using the integrated Melodyne engine! Sing your synth leads or hum your next guitar solo, and instantly turn it into a fully-editable MIDI clip.