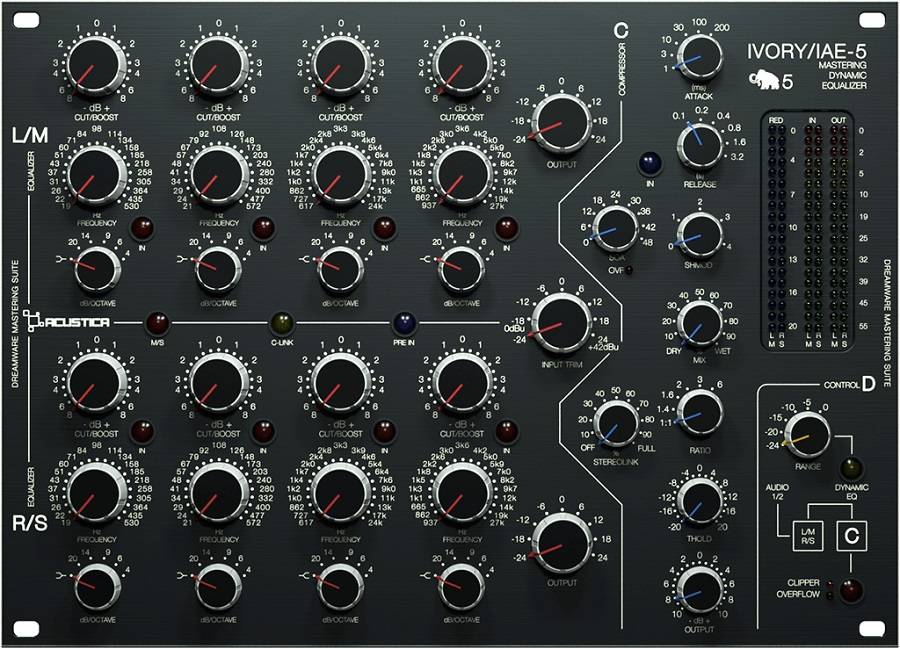 Acustica Audio released Ivory5, a VST/AAX/AU plug-in suite which includes 2 equalizers, 2 compressors, 2 dynamic equalizers and the latest new entry, a powerful Limiter. Each of these modules has been carefully crafted with the goal of building a set of awesome-sounding, mastering-grade tools. Ivory5 is a transparent yet extremely musical processors suite that shines on just about everything you throw it on. Whether you are a mastering engineer, looking for the utmost grade of control in the studio, or you are mixing and producing your next big hit – and you need powerful, versatile tools for shaping your subgroups – Ivory has you covered.

Details
The IVORY5 suite consists of 7 separate Acqua plug-ins, each with a gorgeous graphical user interface that allows for easy and quick operation.

What’s New in this fifth version?
Ivory5 adding exciting new features and a new powerful emulation to your arsenal.

We upgraded it with:

Ivory 5 MAL-2, the Ultimate Mastering Limiter
Ivory5 MAL-2 is Acustica’s own interpretation of a two-band peak limiter inspired by a famous mastering dynamic processor from a well-known British manufacturer. Don’t be fooled, it is not a 1:1 copy of the hardware, so don’t expect the same behaviour!
It’s the perfect choice to control the highest peaks in your music program if inserted at the end of the audio chain in the most traditional way, but it can also be used as an extreme tone-shaping tool on individual tracks.
To use both limiters you need to turn HF ON; this enables a crossover at 2kHz that splits the incoming signal into two bands, allowing you to work separately on different portions of the spectrum (LF and HF). When HF ON is bypassed, then the processor becomes a classic wide-band limiter. More info in the User’s manual.