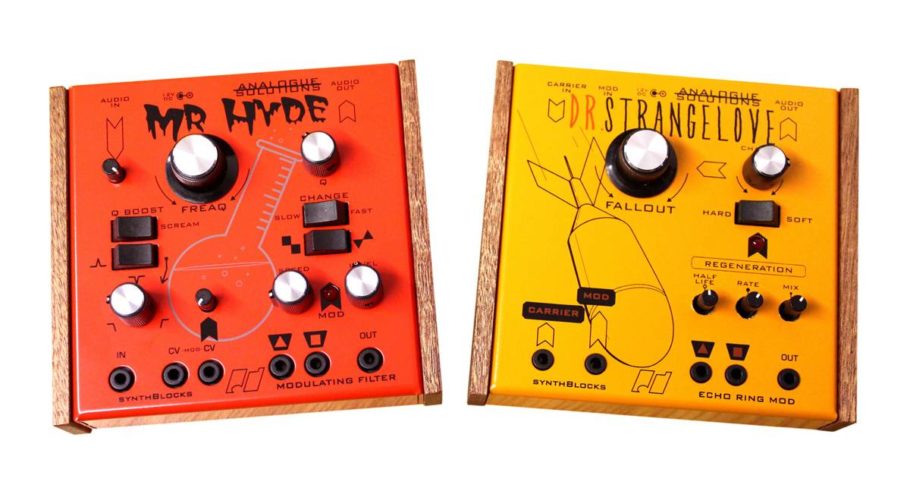 The synthBlocks series represents an all-new range of small and affordable desktop signal processors produced by British boutique electronic instruments innovator Analogue Solutions, an acclaimed company with over 24 years of designing serious-sounding synthesizers featuring fully-analogue audio paths with analogue LFOs (Low Frequency Oscillators) and EGs (Envelope Generators) to its notable name. Similarly, synthBlocks are all-analogue affairs — albeit with some lo-fi digital effects thrown in for good (musical) measure. Menus and software are all eschewed in favour of a hardy hardware approach. As such, synthBlocks are squarely aimed at laptop and audio plug-ins-focused digital musicians wishing to apply analogue, hands-on hardware processing to their sometimes sterile-sounding computer-based creations. Cue simply plugging the synthBlocks in question into an audio interface’s I/O connections, then routing drums, synths, vocals, or whatever out of the DAW (Digital Audio Workstation) and through the transistors and op-amps of the synthBlocks and recording the results back into the DAW. Something similar can be achieved by connecting the synthBlocks to the auxiliary buss of a mixing console — just like any other effects processor. Whatever the workflow, turning the dials and flicking the switches by hand of course changes the sound in realtime — often with radical results. Results of course can be radically different — depending on which of the two available synthBlocks are applied to any given sound signal.

Many might have heard of Mr Edward Hyde, an abominable alternative personality of Dr Henry Jekyll, a fictional character in Robert Louis Stevenson’s Strange Case of Dr Jekyll and Mr Hyde gothic novella first published in 1886. However, hearing Analogue Solutions’ Mr Hyde in the here and now is something else entirely! As announced, Mr Hyde was the first out of the starting blocks in its synthBlocks series as an analogue filter effects box bringing subtle to extreme filtering and modulation effects to the analogue processing production table. To further aid ease of use, Mr Hyde has quarter-inch input and output jacks on its rear, so can be connected straight to an audio interface or mixer without the need for adaptors. The topside of its distinctive blood-red panel features minijack sockets to patch with a semi-modular synth, such as Analogue Solutions’ relatively recently released Fusebox — an aptly-named, three-VCO (Voltage- Controlled Oscillator) true analogue monophonic synthesizer that favourably fuses the company’s characterful vintage sound with an advanced choice of modulation and melodic possibilities (in a beautifully-built box); ever-popular Eurorack small-format modular systems; or other modular systems.

Specification-wise, Mr Hyde doesn’t disappoint by boasting a two-pole 12db/octave analogue multimode filter (featuring lowpass, high-pass, band-pass, and notch filtering options); resonance with a Q BOOST feature to make it SCREAM (self oscillate); LFO with triangle and square wave signals; and a range switch (to bring the modulation speed into audio frequencies). Hands-on control comes quickly, thanks to a selection of switches and knobs — not least the largest knob of all: FREAQ (filter cutoff frequency). Furthermore, the smaller Q knob sets the resonance level, CHANGE changes the frequency range of the LFO from SLOW to FAST at the flick of a switch, SPEED sets the LFO modulator’s speed, and LEVEL controls the modulation level/depth that affects the filter cutoff. More meaningfully, Mr Hyde can change sounds subtly, such as satisfying sweeping filtering, right up to mangled FM (Frequency Modulation) mayhem — perfectly in keeping with its naughty name!

Dr Strangelove is an altogether different character, both literally and figuratively speaking — Stanley Kubrick’s 1964 political satire black comedy Dr. Strangelove or: How I Learned to Stop Worrying and Love the Bomb, anyone? Actually, Analogue Solutions’ Dr Strangelove is a compact, high-quality analogue ring modulator (with two audio inputs) and an analogue LFO capable of going into audio range (with two waveforms), plus a lo-fi echo (giving an ‘analogue’ bucket brigade-style sound). The ring mod itself does not have any controls as such, since a ring mod does not have parameters that can be altered — other than input and output levels. Just plug in audio cables and it does its thing! Ring mods do need two audio sources, however — namely, the main signal to be processed (carrier) and the signal that will modulate the carrier (modulator).

In the strange case of Dr Strangelove, one of those sources, the MOD (modulation) input, can be audio or a low frequency signal (from, say, an LFO). Literally switching switches — HARD/SOFT (selects between square and triangle wave modulation signals — triangle resulting in softer modulation while square results in sudden, harder changes) — and turning knobs — CHANGE (sets the modulation depth or ‘loudness’ of the modulating signal fed into the ring mod’s modulation input), RATE (sets repeat rate), and MIX (sets the mix level between fully dry and a 50/50 balance between wet and dry) — makes music mangling child’s play. Other controls clearly allude to the aforesaid film: FALLOUT alters the speed of the analogue LFO modulator while HALF LIFE sets delay time. All told, then, Dr Strangelove is ideal for subtle or extreme modulation effects. Like its Mr Hyde synthBlocks sibling, Dr Strangelove includes minijack (Eurorack-accommodating) audio and CV (control voltage) I/O for direct connection to modulars.

Mangling music setups sonically while adding analogue warmth is a synthBlocks speciality, so why not consider adding one or more of them to your music setup today? And all without breaking the bank while fitting in the palm of your hand! Hand built, having been designed and engineered in England by Analogue Solutions, surely it’s time to wave goodbye to those sometimes sterile-sounding computer-based creations by saying hello to some synthBlocks?

UK pricing for the Mr Hyde and Dr Strangelove synthBlocks is £255.00 GBP (including VAT) apiece, available from dealers:
Analogue Solutions