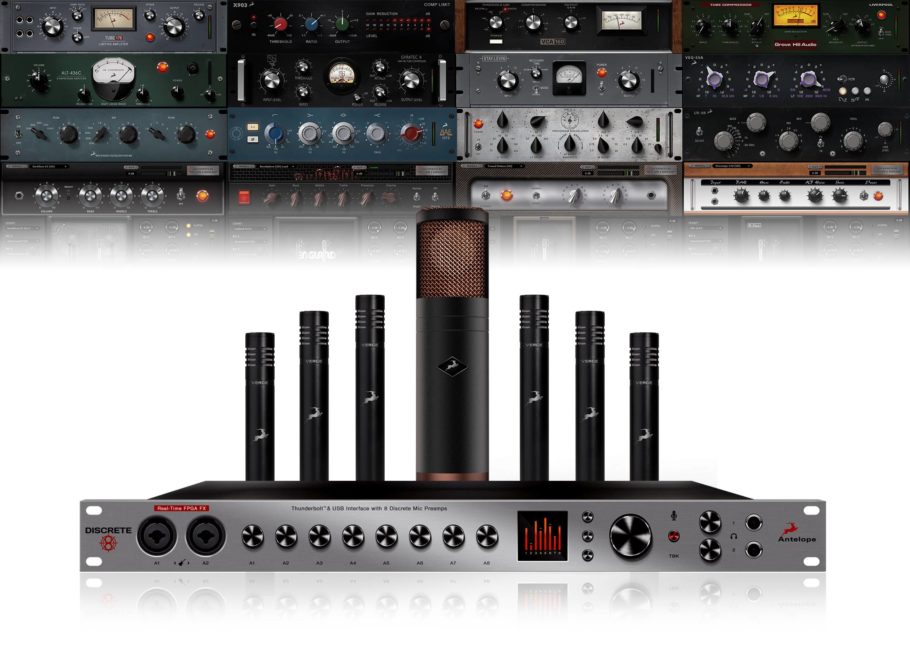 Antelope Audio is proud to announce (upcoming) availability of its DISCRETE 8 ThunderboltTM & USB Interface with 8 Discrete Mic Preamps plus accompanying EDGE and VERGE modelling microphones — also available as various bundles bringing a new level of sound quality and power to home studios and mobile recordists alongside a true cutting-edge front end that will usher in a new era for modern recording.

When working, DISCRETE 8 users can create custom presets to easily and speedily set up various tracking scenarios. The front panel features a large monitor volume knob and dedicated HP knobs for each output. On top of that, the talkback microphone is also built into the front panel right above the TBK (talkback) button. Better still, talkback can be engaged via the assignable FOOTSWITCH on the rear, in the EasyPanel software, or via the iOS/Android app. Meanwhile, metering is viewable on the front panel display, inside the EasyPanel, and also via the remote app.

As a 26-input/32-output audio interface with eight analogue inputs (A1 through to A8), eight analogue outputs (on a standard 25-pin D-SUB connector), a pair of MONITOR outputs, two REAMP outputs, and a pair of headphone outputs, with additional digital connectivity courtesy of S/PDIF IN and OUT alongside dual ADAT I/O, DISCRETE 8 was developed after extensive research of legendary microphone preamp circuitry. Console-grade, fully-discrete preamps were hand-designed to offer world-class sound, and Antelope Audio’s powerful FPGA (Field Programmable Gate Array) engine can transform those already expensive-sounding Accusonic preamps into several classic units via tube-, transformer-, and FET-based circuitry… and all in realtime!

Reality dictates, therefore, that both engineers and performers alike can instantly hear the authentic blends of 10 different mic preamps — without any latency or annoying comb filtering. Fortunately, the microphone source can be recorded with or without Accusonic modelling, allowing engineers to choose between preamp models during mixing. Moreover, the entire signal path was designed for optimal sound with any microphone, yet really shines when working with Antelope Audio’s new EDGE and VERGE modelling microphones, which were both specially designed for DISCRETE 8’s preamps, featuring matching discrete electronics.

Entering the wonderful world of DISCRETE 8’s FPGA Accusonic 3D Modelling Engine enables users to transform both EDGE and VERGE into vintage replicas, realising complete control over proximity effect, off-axis response, and even allowing them to change polar patterns during or after recording! Try choosing from a collection of classic, costly microphones, then track the results while monitoring live to bring out the best possible performance from musicians. Bought bundled together, Antelope Audio’s all-new DISCRETE 8 ThunderboltTM & USB Interface with 8 Discrete Mic Preamps plus accompanying EDGE and VERGE modelling microphones make for a winning team, bringing all-star performance and technology to a new audience. As an example, a DISCRETE 8 working with one EDGE and six VERGE modelling microphones can capably run two chains of FPGA effects inserts and all microphone emulations for one mic.

And if that’s not enough to convince, consider this: DISCRETE 8 can even save and load presets and exchange settings with Antelope Audio’s full lineup of FPGA- equipped professional audio interfaces, making it a no-brainer for both new users and existing owners using a second rig for touring or travel by allowing them to leave their current studio setup untouched when on the road or engaging in session work outside their own facility — free to roam, recording whatever and whenever with that winning team of modelling microphones and DISCRETE 8 ThunderboltTM & USB Interface with 8 Discrete Mic Preamps!