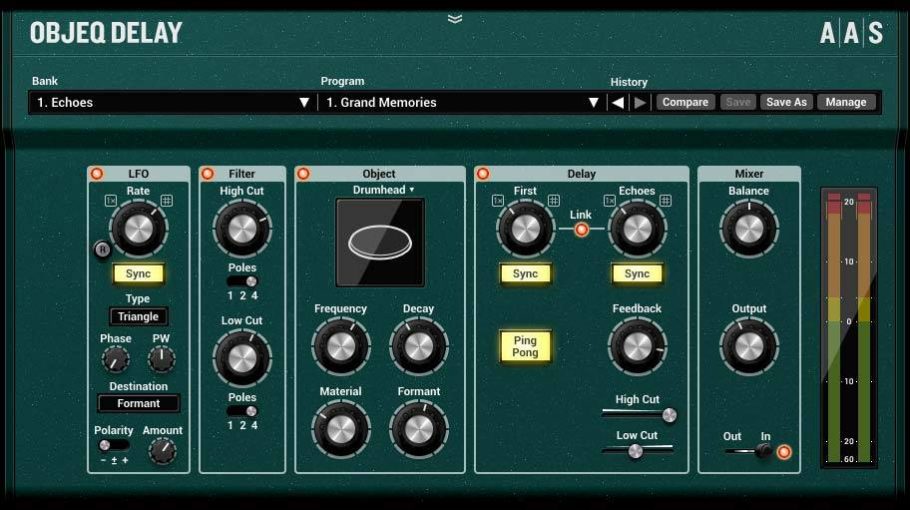 Objeq Delay is a creative effect plug-in combining acoustic filtering with a clever delay unit. The plate, beam, drumhead, and string objects impart evocative acoustic resonances to the input signal. Further shaping is also available via low- and high-cut filters. The in-series delay acts as a classic unit or can split the first and subsequent repeats to either remodel the attack or create complex rhythmic patterns. A LFO module completes the package with comprehensive modulation destinations to the filter, resonator, and delay parameters.

”Objeq delay is a truly creative and fun effect with multifaceted applications,” said Eric Thibeault, the product’s designer, “Objeq Delay is obviously a great delay unit, but the complete feature set takes it to another level. The acoustic resonator is a great percussion track enhancer—it’s fantastic on kicks and snares. The split between the first and subsequent echoes can mangle simple loops into new complex rhythms. The LFO allows various modulator-type effects such as flanger and chorus. And then when you bring it all together, a highly resonant object with the delay brings you into the drones territory.”

Pricing and Availability:
Objeq Delay is available now at a suggested retail price of US$139 but until May 15th, 2017, it is offered at the introductory price of US$99.

There are also some tutorial videos available: