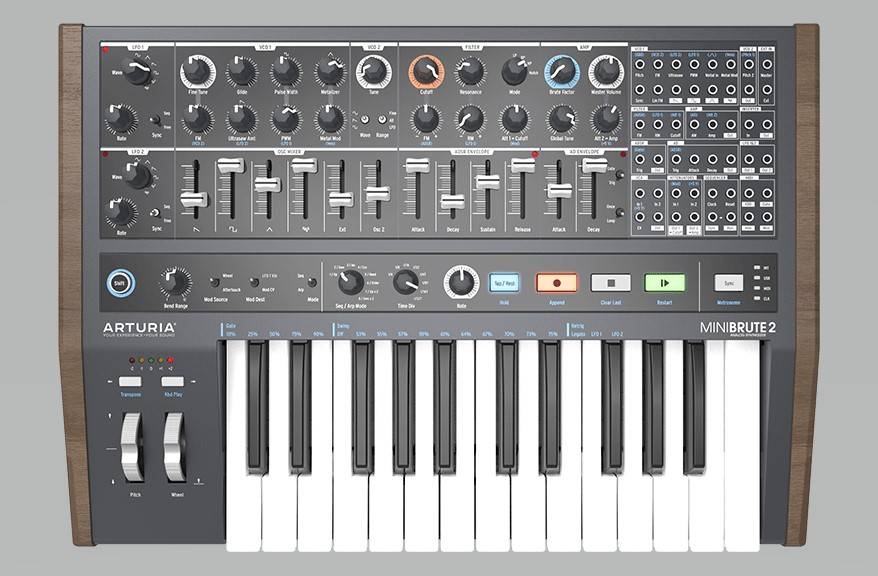 From their headquarters in the French Alps, hardware and software instrument creators Arturia have announced the worldwide arrival and immediate availability of MiniBrute 2, MiniBrute 2S, and RackBrute.
The exciting new range of hybrid analog modular synthesizers feature hugely powerful synth capabilities, addictive interfaces, performance controls, Eurorack compatibility, and allow users to create an immersive, creative ecosystem that’s entirely unique to them.
Retailers and distributors around the world are now receiving the next generation of Arturia’s MiniBrute. Announced ahead of NAMM 2018, the new range was one of the highlights of the show, and has been well received by reviewers. Following glowing reviews from the likes of Sound On Sound, Sonic State, and Future Music, customers will now be able to get hands on with the instruments, try them out, and make them part of their musical setup.
“ A lot of effort was put into this baby ” remarked Sebastien Rochard, Arturia’s lead product manager. “ The first reactions and reviews are astounding, and I can’t wait to see all the crazy stuff people will do once they have it in their hands! ”
To coincide with the MiniBrute 2, MiniBrute 2S, and RackBrute systems hitting stores around the world, Arturia have also launched a video tutorial series that will allow new users to quickly get up to speed with the instruments. The first episode, online now, covers the synthesis possibilities, and explains the common parameters shared by both MiniBrute 2 and MiniBrute 2S. Every feature is expertly covered by Sebastien Rochard, who was also a key player in the design and development of the MiniBrute 2 series.
MiniBrute 2 is a formidable analog synthesizer featuring a CV patchbay that lets you reshape and redesign its architecture, a luxurious 25-note keyboard, sequencer, arpeggiator, and Steiner-Parker filter for full creative control.
Geared toward the modern electronic musician, MiniBrute 2S features the same powerful analog synth engine as the MiniBrute 2, but replaces the keyboard with an advanced, triple-layered sequencer with performance pad interface.
The RackBrute 3U and 6U systems are affordable, adaptable Eurorack modular housing systems that can either be used in a standalone mode, or connected via the Arturia Link system to either the MiniBrute 2 or MiniBrute 2S to create an inspiring modular synth ecosystem.