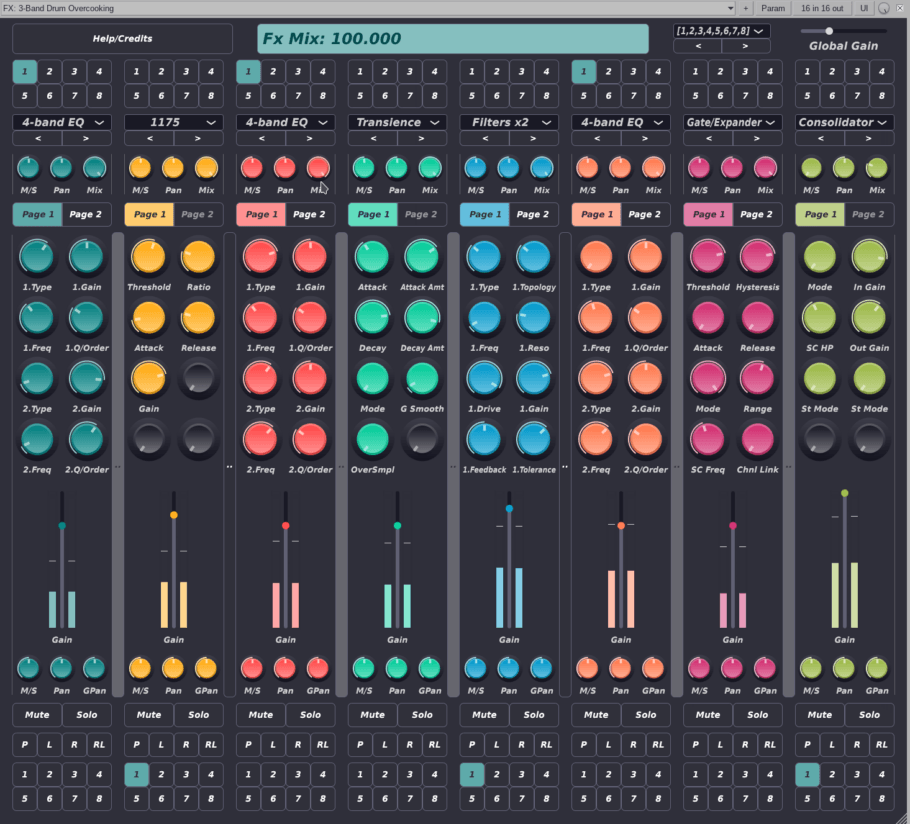 The plugin has 8 stereo buses in and out. It has 8 mixer channels too. Any of them can take any combination (sum) of the 8 plugin input buses and output to any combination of its 8 plugin output buses.

Additionally each mixer channel can send its output to the neighboring mixer channel inputs, allowing to chain the FX on each mixer.
On top of that the 8 mixers can be divided on groups of 4 and 2 buses connected in series, with the equivalent effect as if two or four instances of the plugin were loaded on the host in series (with the reduced number of buses). This allows FX chains with paths in series and parallel, while not being fully modular (and with no wires).

As this is a flexible mixer with a FX unit per channel and it is possible to route the mixers flexibly, the plugin can cover multiple roles. Depending on how it’s used this plugin can be:
A bus router, splitter, joiner.
A MS/Converter.
An in-track Mixer.
A FX processor to place after multichannel Drum Machines/Synths.
A crossover of maximum 8 bands.
A multiband FX processor.
A channel strip with easy to reorder modules.
A creative multi-FX.
An Open Source plugin bundle. So you don’t need to install the plugins that are bundled separately. As the plugin itself is much
smaller than the sum of the contained FX, one could argue that it might be CPU cache friendly.
A C++ port of some popular Reaper Jesusonic FX.

The interface is not designed for laptop screens. As of now it shows 347 GUI widgets on screen simultaneously, this allows a fast workflow with minimal page changes. It will never be readable on a laptop. The interface itself is resizeable (plain vector-based JUCE) but at small sizes it will become hardly usable.

The plugin is tested only on REAPER, mainly on Linux, but sanity checked on Windows.

The code should compile on Mac with minimal modifications, but I’m not a Mac user. I never tried.

I compile an LV2 version too. (Untested, not a LV2 user myself). It can be found on the build artifacts on the main repo.
MixMaxTrix