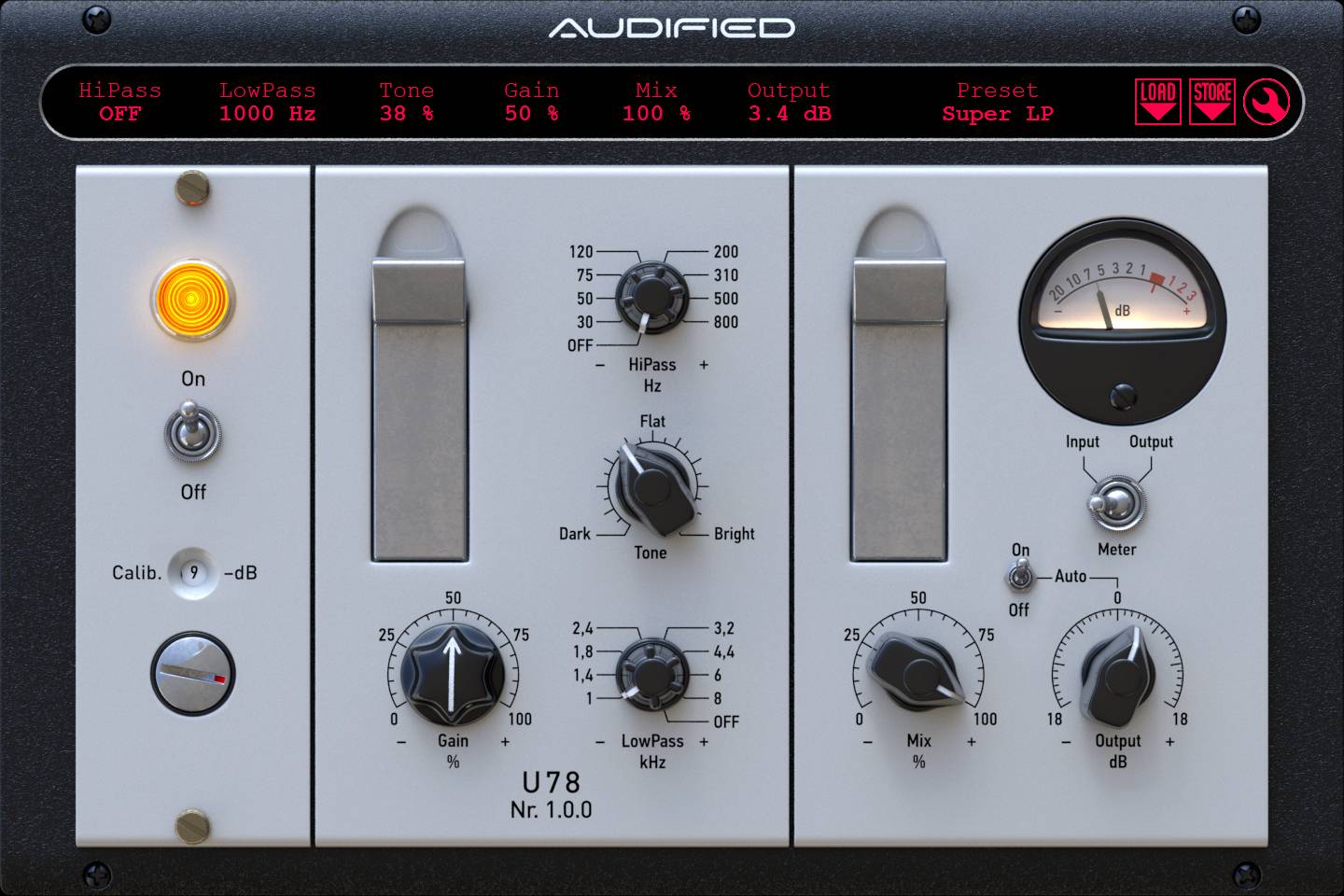 Audified announced the availability of U78 Saturator, a saturation effects plug-in par excellence, utilising meticulous models of the amazing-sounding analogue circuitry central to the U73b, the treasured Sixties-vintage German broadcast compressor/limiter that found favour in European mastering circles well into the Eighties and beyond, but supplementing the tube saturation circuitry with high-pass and lowpass filters and a unique tone filter for some seriously satisfying saturation.

Despite having recently rebooted its award-winning U73b Compressor as a new and improved emulation of the unique-sounding Sixties vintage German broadcast compressor/limiter hardware with which it shares its name and takes its inspirational sound, Audified has not stood still when it comes to taking tube saturation to higher levels of creativity for demanding DAW (Digital Audio Workstation) users… users like Boris Carloff, a well-known Czech Republic producer who just so happens to ‘moonlight’ as a product designer for Audified. After all, almost anything is possible in the digital world. With the right skills and technology you can create absolutely anything you like… like the U78 Saturator. “I was always crazy about the sound of the U73b,” begins Boris Carloff. “I like this unit — great saturation, but there are situations when I need more saturation and distortion. This is why I came up with the idea of the U78.”

Implementing that idea involved removing the U73b Compressor’s compression function. Filters were added — HiPass sets the cutoff frequency of the high-pass filter, which comes before the saturation circuit in the signal path, ranging between 30 to 800 Hz; LowPass sets the cutoff frequency of the lowpass filter, which also comes before the saturation circuit, ranging between 1 to 8 kHz — alongside a Tone control to dial in (or out) the unique tone filter, with lower settings producing Dark sounds with more low frequency content while higher settings result in Bright, sparkly sounds; finally, a strong Gain control adjusts the input gain of the saturation circuit — the higher the settings, the more rich the sound that can be achieved — and effectively completes the seriously satisfying U78 Saturator sound… to Boris Carloff’s satisfaction!

Understandably, U78 Saturator’s gorgeous GUI (Graphical User Interface) implementation is superficially similar to that of its recently released U73b Compressor sibling. Predictably, perhaps, the two plug-ins even share some more mission critical features. For example, the power and calibration module is identical when taken at face value with an On/Off switch (to toggle between processing and bypassed states) and a -9dB default Calib. (calibration) setting with an added value mechanism; moreover, the software model works with real voltages that are the same as those found in the original hardware circuitry (related to the dBu scale), but the DSP (Digital Signal Processing) in DAWs works with dBFS (Decibels relative to full scale) so users can (carefully) set the calibration (to work within the correct operational range of U78 Saturator’s saturation effect).

Elsewhere, in the level control module, Mix controls the dry and wet signal ratio with the dry signal only delayed to match the wet signal path latency to prevent phasing issues, while Output adjusts the output gain of the whole effect and can be adjusted automatically when Auto is switched to On (thereby retaining approximately the same loudness whenever the input Gain parameter is changed).

Continuing onwards and (literally) upwards, just like the U73b Compressor reboot before it, U78 Saturator’s gorgeous GUI implementation includes a display area that is as easy on the eye as it is easy to use with selectable display colour. All parameters can be set numerically while Preset management is located on the right-hand side of the display alongside self-explanatory LOAD and STORE functions and a helpful key symbol-designated services menu (to access the User Manual, Check For Updates, go to the Audified Website, and more).

More meaningfully, U78 Saturator sees Audified keeping the heart and soul of the machine to deliver a beautifully musical tube sound. Satisfaction guaranteed, the result is a saturator that sounds like no other. By being blessed with the things that dreams are musically made of, the U78 Saturator plug-in is even better than the real thing… just ask Baby Brown. “I can’t wait to see what these guys come up with next,” notes the Grammy®-nominated producer, before concluding: “This one’s now in my toolbox… they’re not getting it back!”

U78 Saturator can be seen and heard in an informative introductory video (featuring both Boris Carloff and Baby Brown) here: