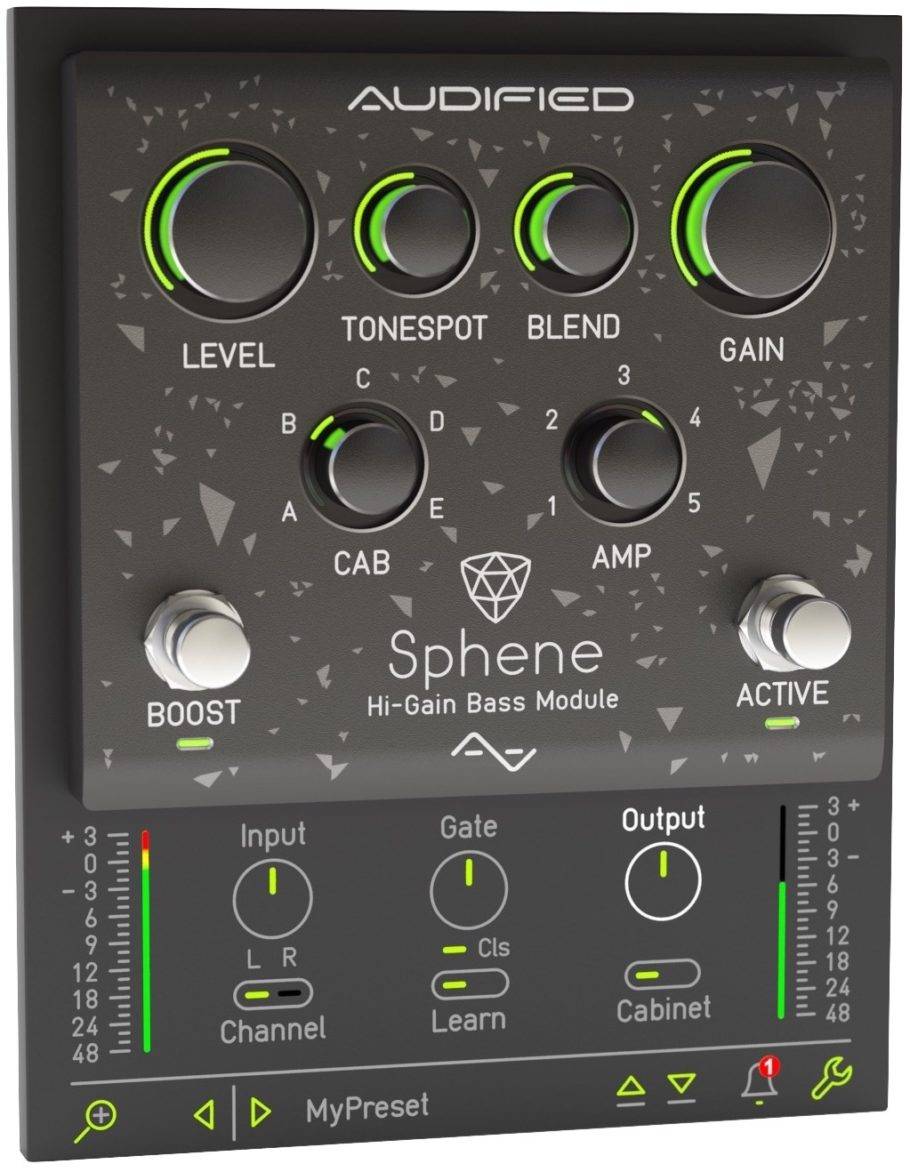 Audified is proud to announce availability of Sphene Pro — an aptly-named ‘gemsTone’ of a plug-in with which users can quickly produce polished yet unique and cutting-edge, contemporary distorted bass guitar tones to help make heavy grooves stand out, thanks to smart tone shaping and proprietary sound aesthetics with pedal-like familiarity fit for today’s metal sub-genres, such as Djent, itself an onomatopoeia of the high-gain, distorted, palm-muted, low-pitch guitar sound with which it is associated — as of June 24…

The aptly-named Sphene Pro plug-in is a collector’s ‘gemsTone’, getting its owner into unique and cutting-edge distorted bass tone zones with speedy, pedal-like familiarity and an astonishing variety of often aggressive sound options that live up to that appellation. After all, the greenish- yellow or brown sphene mineral consisting of a silicate of calcium and titanium occurring in granitic and metamorphic rocks in wedge-shaped crystals is rather raw and rustic, rarely occurring as a clean gemstone in nature. Perfectly polished, however, it becomes bright, its luxurious light exceeding even the shiniest of minerals. As an analogy this can effectively be applied to the Sphene Pro plug-in — producing polished yet unique and cutting-edge, contemporary distorted bass guitar tones with intuitive and variable bass tools in one virtual box, rather than picking and choosing from a seemingly-endless supply of traditional bass amp models and overcomplicated bass plug-ins when chasing down desired tones. Think of Sphene Pro as a contemporary high-gain bass workstation that makes heavy grooves stand out in today’s metal sub-genres and beyond, as highlighted by the Hi-Gain Bass Module wording boldly blazoned across its eye-catching GUI (Graphical User Interface).

It ably achieves this with the greatest of ease via the following features: five AMP models — choose from five pre-tuned amplifiers with completely different voicings, each tailored to accommodate various bass distortion aesthetics and playing styles; five CAB impulses — custom cabinet modelling based on parallel IIR (Infinite Impulse Response) technology with minimal phase issues and low latency; TONESPOT — extremely usable across all positions of the knob by building upon the development and success of Audified’s acclaimed series of ToneSpot plug-ins providing complex and efficient EQ shaping using only minimal controls; BLEND — mixes in the drive section of the pedal, the dry signal still being processed by the TONESPOT and CAB circuitry models when the control is completely turned down; BOOST — engages the boost function to instantly push the signal, producing a more focused bass tone to seriously satisfy any bass ‘Djentlemen’ out there; and Gate — an onboard expander-gate activated via the utility panel below the ‘pedal’ that includes a threshold Learn feature that can be engaged separately.

By being based on over 10 years of experience in modern metal mixing and mastering, with the aptly-named Sphene Pro plug-in Audified’s engineers have deftly developed a true gem of a plug-in to share their favourite distorted bass guitar tones with the rest of the world. Why not take a little time to experience the mighty rumble that shakes the company’s office windows every other day with everything needed neatly packaged in an intuitive yet complex pedal-like tool like no other!

Sphene LE — featuring the same processing power as its bigger brother, but with a single AMP model and a single CAB impulse response (so no need for any AMP and CAB controls) — is available to purchase for only $2.00 USD from Audified’s online shop here:
Audified – Sphene LE