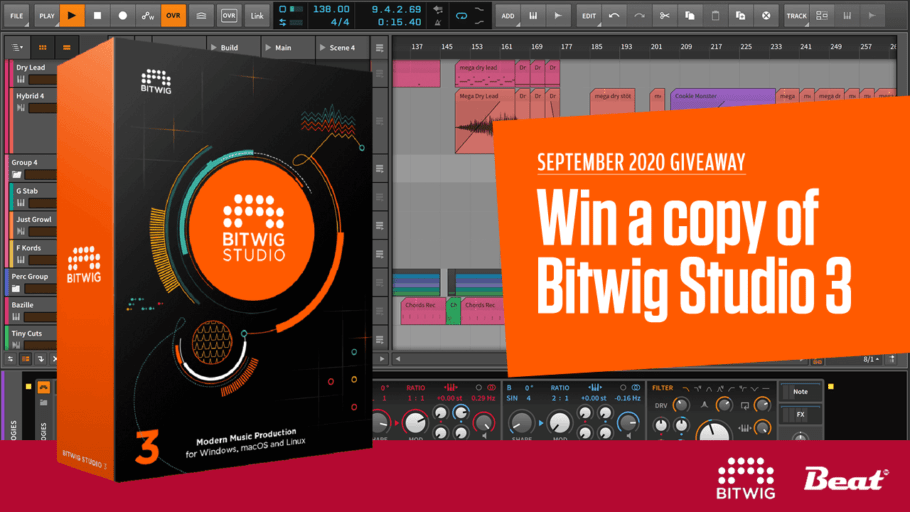 Extensive playground, clip-based performances, linear recording, integration of hardware and modular systems, endless on-board effects, great synthesizers, practical tools from the vital community and and and and … is something still missing? Probably not, because Bitwig is pretty much the most complete and flexible DAW on the market. And soon also on your studio computer? Take part and win the full version worth 379 Euro! http://bit.ly/BeatBitwigGiveaway

Why Bitwig Studio?
While Bitwig 3.0 introduced the modular playground “The Grid”, the latest update provides users with numerous smaller updates for faster workflow, as well as new modules for bending pitches, and the Wavetable import à la Xfer Serum in the sampler. The new modules Micro-pitch, Pitch-12 and Transpose are responsible for this purpose. True to its name, Micro-pitch allows the fine-tuning of incoming notes to leave the usual paths with western scales. Melodies can also be tuned to 432 Hz, for example. Pitch-12 in turn converts incoming notes into controller data for further use as a source of modulation.

New effects: EQ+ and Saturator
EQ+ gives Bitwig Studio a new look and modern sound. By clicking on the EQ curve, a band is added that can be dragged directly to the appropriate place. In addition to 14 filter options and up to eight bands, EQ + also has an Adaptive Q option that reduces the width of bands as gain increases.
The Saturator is a unique waveformer for official hum, buzz and rumble. The advanced editor provides a suitable set of controls for threshold, transform amount and knee for the soft and loud parts of the signal. Additional skew controls record the loud sounds and treat the positive and negative transients differently, further enriching the sound and spectrum. The Grid has also been expanded to include a Saturator module, which allows each note to be shaped independently through polyphony to provide even more sonic possibilities.

Get Bitwig as full version now
At the current Beat Magazine giveaway, you now have the chance to get a full version of Bitwig Studio 3, which will run until September 30, 2020 at 9:09 am. The winner will be contacted by e-mail and announced on the contest website. Click here to participate:
Beat Bitwig Giveaway