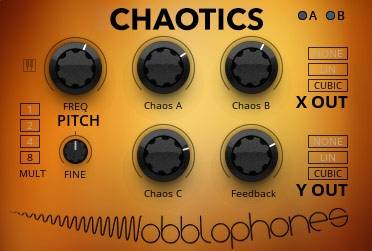 With the new tool Chaotics the developer Wobblophones presents a chaotic Reaktor synth generator for free, which consists of three different Reaktor Blocks of Native-Instruments. The three Blocks are:

-Feedback Sine: a chaotic generator that can sound like a guitar with feedback, an angled grinder or even a plain old sine oscillator.

-Tinkerbell Sin: based on the classic Tinkerbell chaotic map, this generator has a relatively high frequency, but tends to remain somewhat “pitchy”.

-De Jong Chaos: runs the De Jong strange attractor. It tends to produce lower frequency outputs than the other two, while also sounding a bit more gentle when properly chaotic.