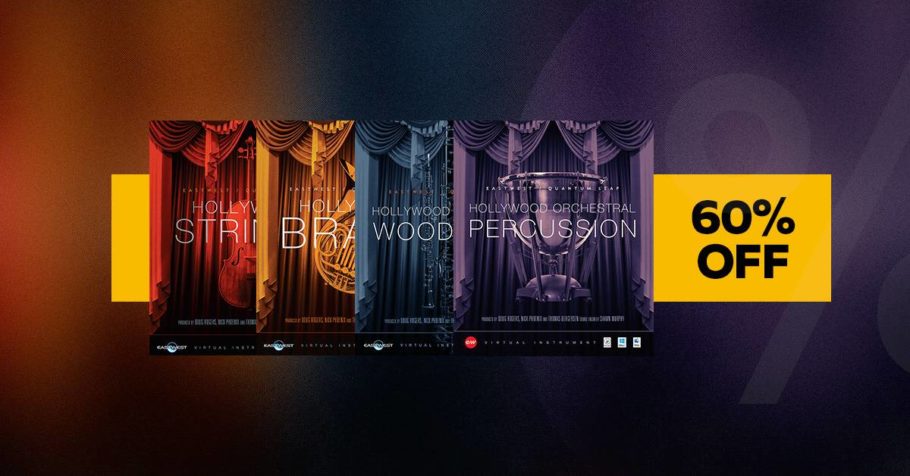 Produced by DOUG ROGERS, NICK PHOENIX, and THOMAS BERGERSEN and Sound Engineered by SHAWN MURPHY (ACADEMY AWARD, C.A.S. (Cinema Audio Society), BAFTA, and EMMY award-winning sound engineer) this is the culmination of over seven years of recording, editing, and programming, and is a must have compositional tool for serious composers!

“Beautifully recorded by the award-winning Shawn Murphy, the timbre of some instruments takes the breath away, and collectively they will add sheen, depth and orchestral authenticity to your arrangements” – SOUND ON SOUND

“Hollywood Orchestra Gold” is a bundle of the Gold versions of the following products:

With 99GB of content, this is truly the holy grail of orchestral virtual instruments. Each library in this collection was released as each section of the orchestra was completed, and they have already received multiple major awards from the international press, including Electronic Musician’s “Editor’s Choice Award” and Future Music’s “Platinum Award”.

Perfect for Film. TV & Video Game Underscore, Hybrid Orchestral and Epic Trailer music, this is a must have compositional tool for serious composers! The libraries all run in the Play 5 engine which comes free and works in VST, AU, AAX & RTAS format.

Kick here to get this awesome DEAL
Deal: Hollywood Orchestra Gold by EastWest 60% off was last modified: May 16th, 2018 by Noizefield