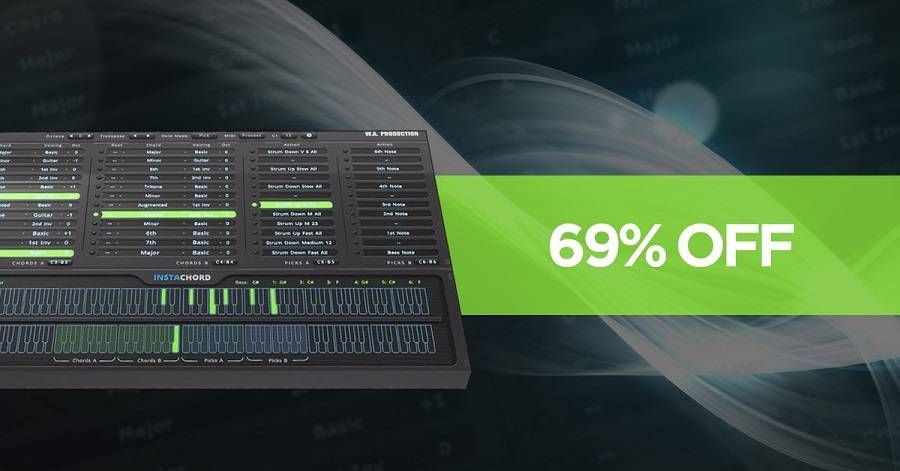 “Instachord” is a MIDI Processing Plugin that helps you play chords and chord progressions faster and easier. Using richer chords and new chord progressions can take your song to a new level and make it sound unique and professional.
Whether or not you are an experienced musician or just a beginner, with a vast chord bank and amazing playability, Instachord has something to offer to you.

The foundation of a great song is based on its harmonic movements and chord changes which is often called chord progression. A change in chord progression can have a drastic effect on the mood or direction of a song. Even those with a background in music theory can experience repetition and stagnation.

If you’re a songwriter or a producer it will help you speed up the workflow and song creation process. Find the best progression and use a single midi pattern to play all of them.
If you’re a player it allows you to play some of the hardest chords, in any musical key and combination of notes and different voicings, using just a few keys on your controller. Or jam and practice over them without spending much time creating a jam track.
If you’re a student or a teacher you can use the plugin to learn and study the chords and use it as a reference and hear them in action.
Find the chords that work well together and build a perfect chord progression for your next song with just a few clicks. You can transpose all the chords to any other key you want using the ‘transpose’ button.
In addition to having access to chords and being able to set a progression, one of the other great things about Instachord is it’s playability.

Kick here to get this awesome DEAL
Deal: Instachord by W.A. Production 69% off was last modified: September 5th, 2018 by Noizefield