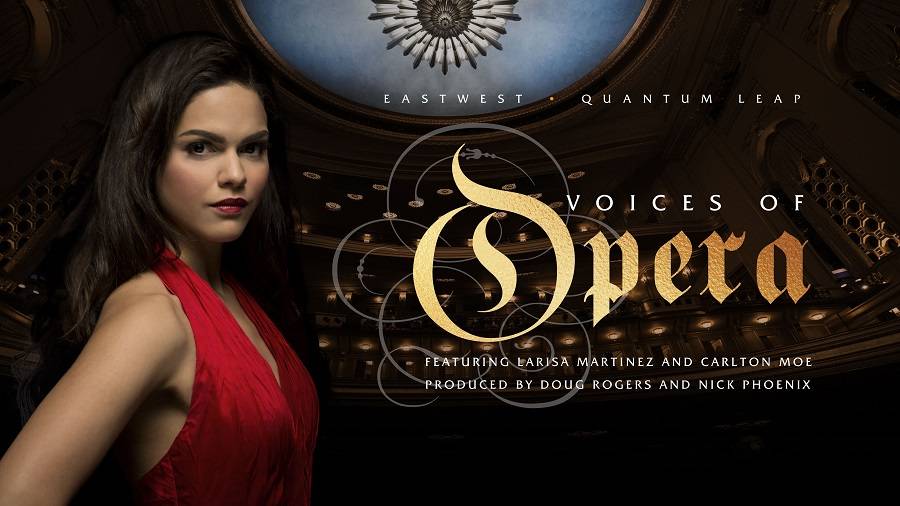 EASTWEST is proud to announce the release of VOICES OF OPERA, a brand-new virtual instrument featuring the sensational vocals of soprano LARISA MARTINEZ (Andrea Bocelli) and tenor CARLTON MOE (Phantom of the Opera).

VOICES OF OPERA is perfect for any composer looking to add a pristine operatic sound and fits in perfectly with EastWest’s recent slate of award-winning vocal products HOLLYWOOD CHOIRS, VOICES OF THE EMPIRE, and VOICES OF SOUL.

From the most awarded producers in the sounds industry, Doug Rogers and Nick Phoenix, VOICES OF OPERA is now available for purchase or as a free addition for subscribers of ComposerCloud, the #1 subscription service for musicians that has revolutionized the virtual instrument industry.

Larisa Martinez has established a strong and unique presence in the classical performance world. She’s currently performing with opera titan Andrea Bocelli as his principal soprano on his world tour. She is a winner of the Metropolitan Opera National Council Audition PR district 2016, where she also received the Angel Ramos Foundation Award and Audience Prize. She earned raved reviews as Musetta in Loft Opera’s critically acclaimed production of La Bohéme and for her other leading roles in Verdi’s Rigoletto, Gounod’s Roméo et Juliette, Rossini’s Adina, Floyd’s Susannah, and Donizetti’s Don Pasquale and Lucia di Lammermoor.

Heralded by the New York Times as an “ardent tenor,” Carlton Moe is currently performing as Ubaldo Piangi in Andrew Lloyd Webber’s Phantom of the Opera, the longest running show on Broadway. His opera credits include Lakmé (Gerald), I Capuletti e I Montecchi (Tebaldo), The Mother of Us All (John Adams), Ernest Bloch’s Macbeth (Malcolm), and Roméo et Juliette (Tybalt). He has also performed as a soloist in major works such as Verdi’s Requiem, Beethoven’s 9th Symphony, Mozart’s Requiem, and Handel’s Messiah.