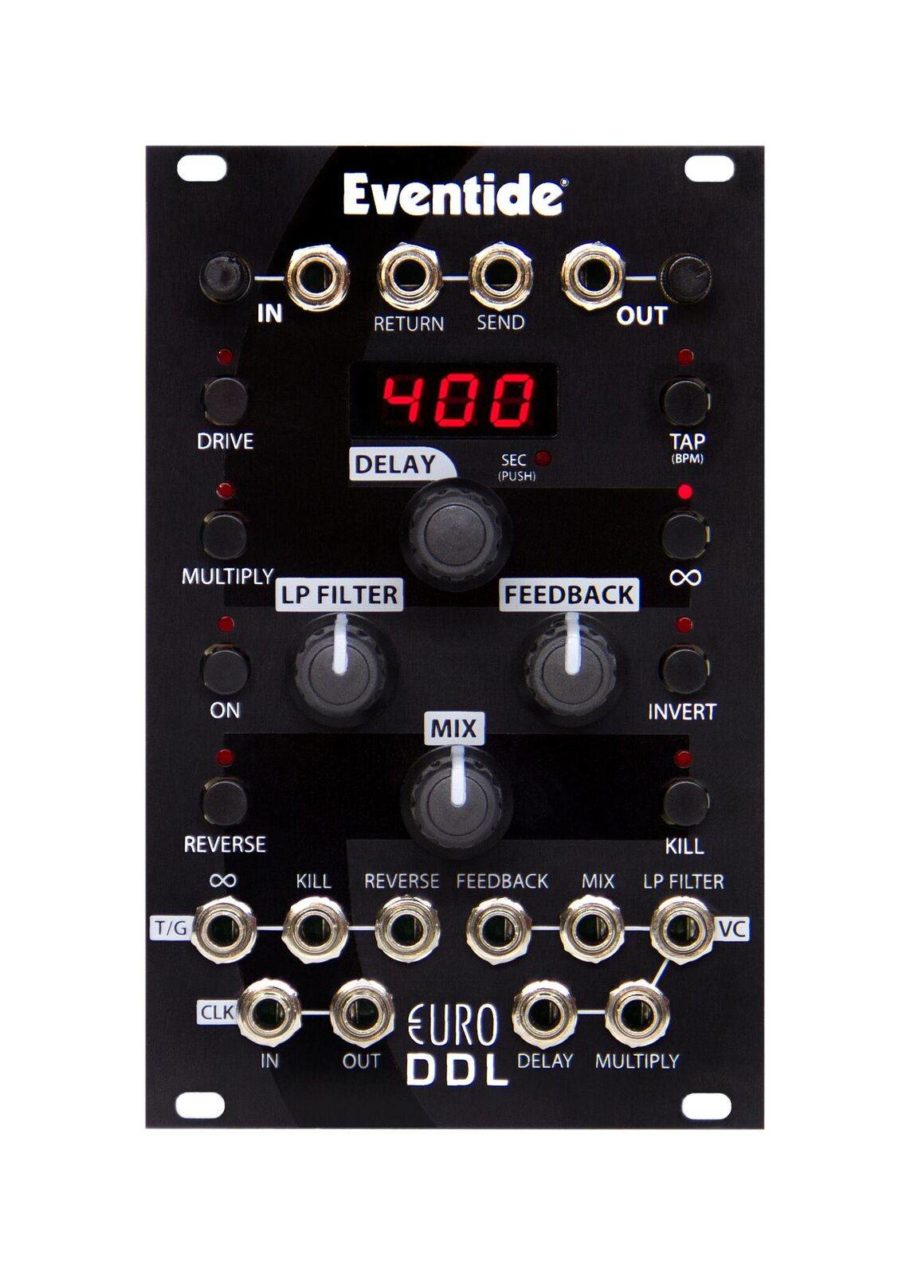 Eventide is proud to release the EuroDDL — entering the ever-expanding Eurorack modular market with a 16HP digital delay (DDL) module made to sound less digital than the average delay while enabling external control of every feature and function — at AES New York 2017, October 18-20, Jacob J. Javits Convention Center, USA.

The digital section is minimal and constrained to do nothing more than simple, yet flexible, delay. The DDL itself is pristine. It’s long. It’s short (0.11msec resolution). It’s smooth, it loops, and it goes backwards (REVERSE). The delay converter is 24 bits with a maximum delay time of up to 10 seconds at 192 kHz sample rate and 160 seconds at 16 kHz sample rate. Delay time can be varied smoothly and over a wide range — either manually, via TAP (BPM) tempo, or by remote control voltage. Short delays can be used for comb filtering and flanging effects. Longer delays for echo effects. Infinite delays for looping. Backwards delays for reverse effects.

To be a true performance instrument, all the controls of the Eurorack module must be remote controllable. The EuroDDL does just that with jacks — clipping, KILL, REVERSE, FEEDBACK, MIX, and LP FILTER — to accept VC (voltage control) and T/G (trigger to gate). It’s designed to be played as an instrument… and it’s designed to ‘play nice’ in the rack with RETURN/SEND and CLK (clock) IN/OUT.

“There’s usually a modular this or that floating around at Eventide; we wanted to create a delay that can be played by musicians — musicians like our own resident experimental music artist Anthony Saunders,” says Eventide Director of Marketing Communications Nalia Sanchez. “Plus, we wanted it to sound, feel, and behave like an analog instrument by doing as much as possible with analog components. It adds cost, but makes a clear difference. There seems to be something that happens to sound when it’s operated on in quantized time. The EuroDDL module keeps whatever that ‘something’ is to a bare minimum.”

The EuroDDL design is derived from the Eventide DDL-500, the 500 Series delay module about which Tape Op’s Eli Crews wrote: “…it has a unique feel and sound, partly due to the fact that the only digital part of the audio path is the delay line itself.”

Currently available in limited quantities, general availability of the EuroDDL is scheduled for January 2018 with an MSRP of $399.00 USD.