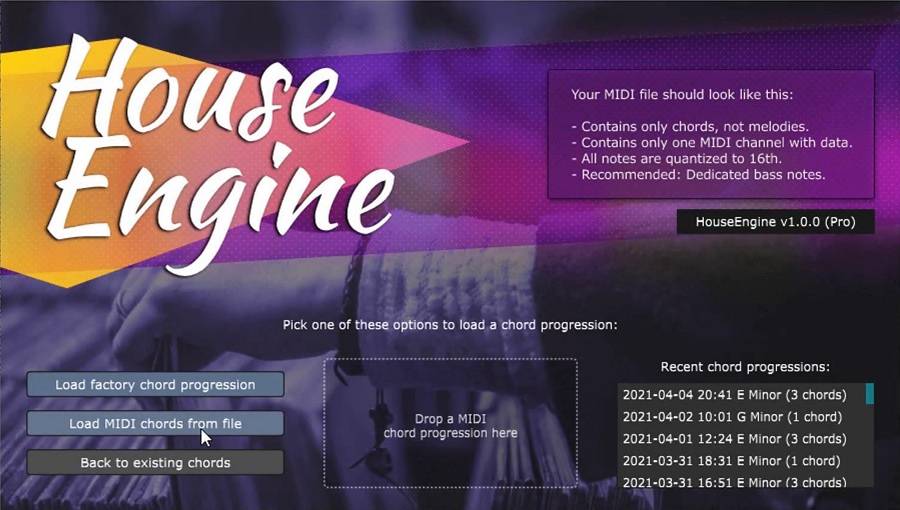 Feed HouseEngine with your chords and the plug-in generates authentic and professional MIDI patterns for you.
No fiddling around with mismatching MIDI packs anymore. All output will be in tune with your original chords!

This is how it works
HouseEngine has been crafted by FeelYourSound, a company with years of expertise in generative music tools and sequencers.
For this release, we combined the power of seven different engines and generator modules. Our dev lab came up with completely new routines to analyze your chords and generate new riffs for them.
HouseEngine has been tweaked from the start to match the style of both modern and classic House styles. We analyzed hundreds of successful House tracks to find the best piano rhythms, the nicest bass grooves, and the snappiest synth lines. The playing styles were meticulously translated to algorithmic recipes for our engines then.

All rights belong to you
Of course, you can use all generated phrases and melodies in your own productions. Whether you do a commercial release, write songs together with friends, or produce a track for another person: As long as you use the generated MIDIs as part of a musical composition, everything is fine.
If you want to distribute the generated files as an own bundle (e.g. if you want to create a commercial or free MIDI pack), you will need to buy a HouseEngine Pro license. The Pro version also contains a MIDI mass-exporter that will make it easy for you to create hundreds of files within seconds.