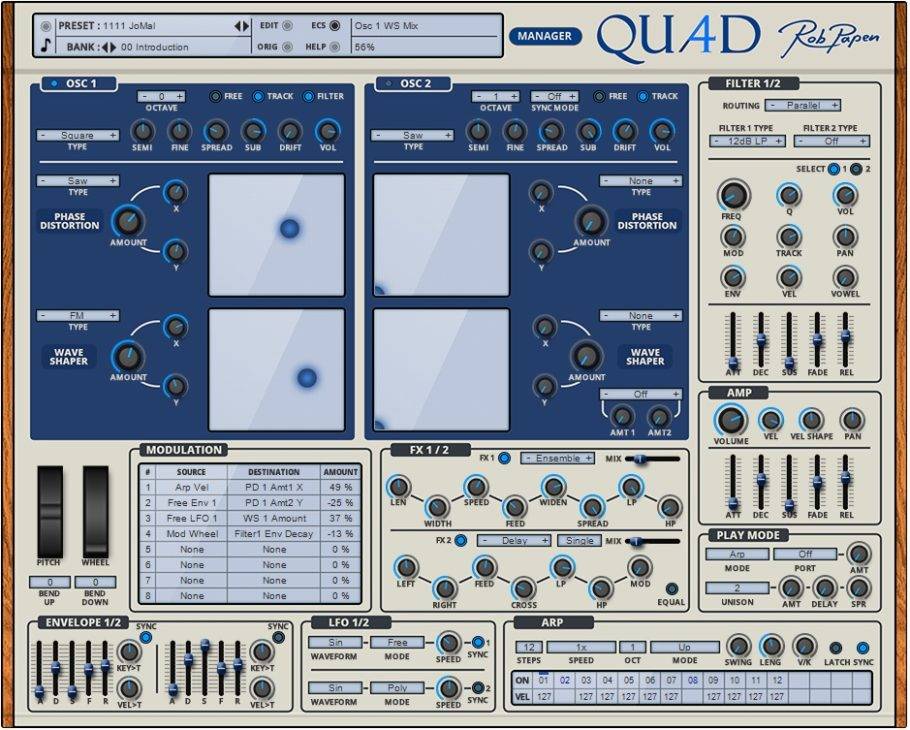 Rob Papen Inspiration Soundware is proud to announce availability of QUAD — originally released to widespread critical acclaim as the first Rack Extension synthesizer built from the ground up by the Dutch company for Propellerhead Reason — as an AAX-, AU-, and VST- compatible virtual instrument plug-in for Mac and PC.

Like its notable namesake Rack Extension synthesizer predecessor, the 16-voice QUAD features two oscillators (OSC 1 and OSC 2), extended — when compared to the original’s seemingly simple arsenal of classic subtractive waveforms — to include a wide range of analogue-modelled waveforms with Sine, Saw, Square, Triangle, W (White) Noise, and P (Pink) Noise, Rez 1, Rez 2, Rez 3, HalfSine, SineSaw, SineSqr, SineRez, SawSqr, and SqrRez available alongside Additive Waves and Spectral Waves, while each oscillator also has a SUB oscillator offering Sine or Square waveforms when respectively turning the dial to the left or right of the centre position. Turning each adjacent SPREAD dial generates a multiple-oscillator sound with increased detuning between the oscillators, and each dedicated DRIFT dial simulates analogue drift of the associated oscillator.

Of course, the sound sculpting tools that set QUAD apart from all other Rob Papen virtual synthesizers are the PHASE DISTORTION and WAVE SHAPER at the heart of each oscillator section highlighted in its GUI. Generous drop-down distortion types are available — namely, Point, And, Cos 1, Cos 2, FM (WAVE SHAPER only), Feed, Fold, Fuzz, Gap, Hard, Oct 1, Oct 2, Oct 3, Or, PWM, PWM2 (WAVE SHAPER only), Rez 1, Rez 2, Saw, Shift 1, Shift 2 (PHASE DISTORTION only), Static, and Trans. These are then brought to life by two X-Y pads, which can be moved through the extensive, eight-slot MODULATION matrix — by using one of the LFOs (Low Frequency Oscillators), for instance. It is also possible to MIDI latch the X and Y parameters to dynamically change the PHASE DISTORTION and WAVE SHAPER using a hardware controller.

Creatively, OSC 2 also includes additional functions for modulating OSC 1 with OSC 2 (or vice versa) with the following types: Ring (Ring Modulation); PM (Phase Modulation); FM1, FM2, FM3, and FM4 — Frequency Modulation; Feed1, Feed2, and Feed3; Sign; Min/Max; Mix; Cross; Skew; Filter; and String (Karplus-Strong). Saying that, it is possible to prevent OSC 1 from going into the FILTER, so that it is only used as a modulator for OSC 2.

An AMP (Amplifier) section includes a VOLUME envelope, VEL (Velocity), and PAN control, while QUAD has two tempo-based — via SYNC settings — envelopes (ENVELOPE 1/2) and LFOs (LFO 1/2), both of which can be connected to numerous QUAD parameters in the MODULATION matrix, including the two high-quality effects processors (FX 1/2) connected in series. FX 1 offers Chorus, Ensemble, (tempo-based) Flanger, (tempo-based) Phaser, or Widener, while FX 2 offers a combination with Reverb — using an algorithm from RP-Verb — and (tempo-based) Delay with Del-Rev or Rev-Del routing options, or as a Single effect.

Elsewhere, various options are available within the self-explanatory PLAY MODE section, including Arp (Arpeggiator) and Arp Uni (Arpeggiator playing with unison active). The ARP section itself includes ON (and off) and VEL (Velocity) per step. Several modes are included, such as Up, Down, Up/Down, Down/Up, Random, Ordered, Rev. Ord (Reverse Ordered), Ord U/D (Ordered Up/Down), Ord D/U (Ordered Down/Up), Chord, and Mod Free (for using the arpeggiator as a modulator if QUAD is in Poly, Mono, or Legato mode).

Seriously ending on a regenerative high note, Rob Papen himself has this to say: “Welcome to the new QUAD synthesizer — now not only available to Reason, but available to all.”

QUAD is included in the latest version of the eXplorer 6 bundle while owners of the original RE version of QUAD can crossgrade to the AAX-, AU-, and VST-compatible version of QUAD for a 50% discount by sending a copy of the purchase receipt or account screenshot to:
[email protected]

A 30-day demo version of QUAD with only one introductory sound bank and all bank and preset loading/saving functionality duly disabled is available from here:
Quad Demo