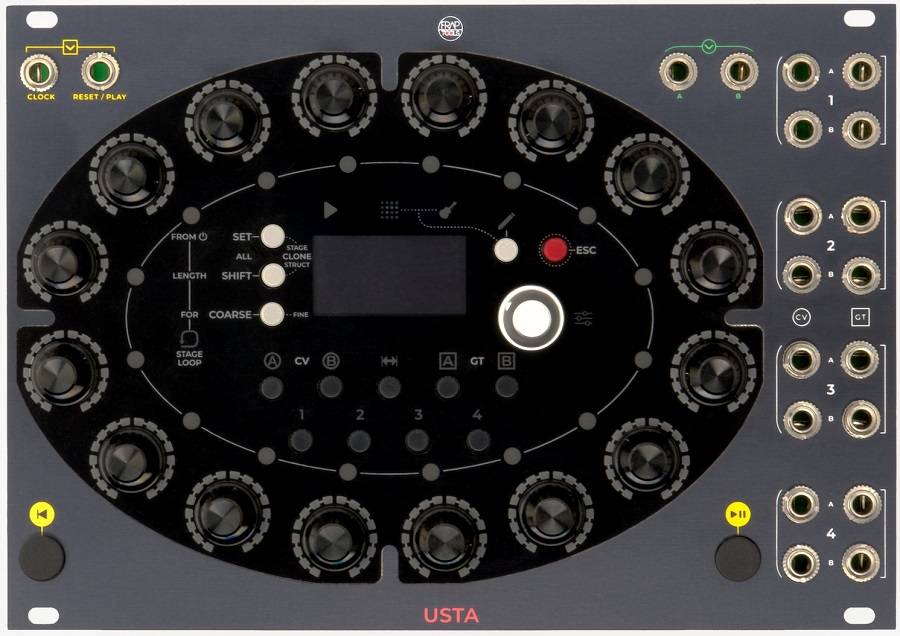 “Variable stage duration” means that every single stage duration can be individually set in relation to the clock, instead of being constrained to a one-to-one ratio (i.e. one stage per every clock impulse).
“4×4 tracks” means that every stage can store and generate up to four separate voltages (two CVs and two gates), and that up to four independent stage sequences can be arranged into as many different tracks.

Its architecture is based on an array of 16 ‘Stages’ which form a ‘Pattern’; 16 patterns form a ‘Track’, and four tracks form a ‘Project’. Within each track, each stage can provide two gates and two CVs, and a wide set of options is available to define and modify the value of each output (‘Layers’) and the way it is played (‘Colors’).

Every Stage is related to a dedicated stepped encoder for quick and intuitive editing, and all the 16 encoders are arranged in an oval layout with a circular playhead. Every encoder is surrounded by a ring of 16 LEDs and a RGB led, to provide a visual feedback of the current setting of that step basing on the layer you are working on (like raw CV, quantized CV, length, gate…) and the way it should play depending on the RGB color.

FRAP Tools announced USTA at Superbooth was last modified: May 14th, 2019 by Noizefield