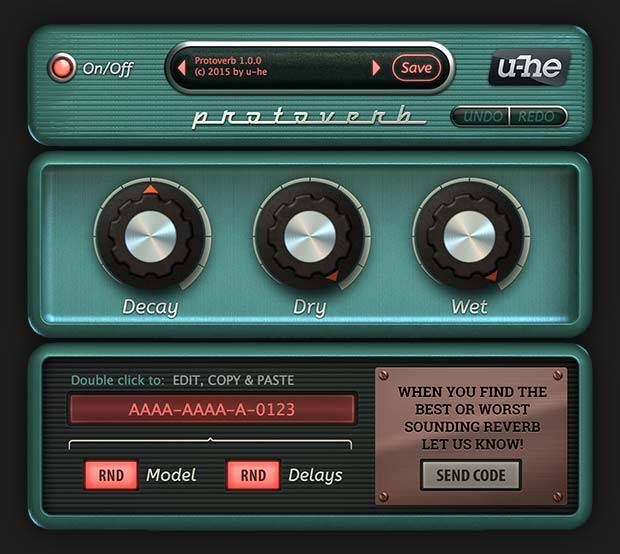 u-he has released a free reverb plugin that is kind of a prototype. The cool thing is that it has two knobs that randomise all kinds of parameters in the background. you can save the results to a txt file.

“Protoverb is an experimental reverb based on the idea of a “room simulator”. Most algorithmic reverbs try to avoid resonances or model the reflections of sound from a rooms walls. Protoverb does

the opposite. It builds up as many room resonances as possible, modeling the body of air in the room. It therefore does not need to modulate or colour the signal. The result is a very natural sounding reverbration with some interesting features: Long standing frequencies resonate louder, as if the air takes some time to get excited. Multiple instruments don’t mash into a diffuse mud, they stay distinct. If you play a short melody, the room seems to repeat a ghost echo of that melody. Those properties are indeed found in churches and large halls, but they’re rarely found in conventional algorithmic reverbs.

To achieve this kind of stuff, Protoverb works with loads and loads of parallel, serial and networked delays. By all means, there is no mathematical formula that makes such a structure sound “just right”. As with all delay based reverbs, it’s down to trial and error, and maybe a lot of luck with random values. Therefore we designed Protoverb to present you with delay lines of random lengths and a random assembly of networking and feedback strategies. Which, if you’re lucky and you come across a great setting, you can submit to our website, along with a few details

To be precise, the small text box at the bottom contains two random entries. The first part depicts the network structure, strategies for a spatial layout and distribution of delay taps, strategies for finding useful delay lengths and so on. The second part is a seed for a pseudo-random number generator which is used to find various parameters, such as average delay length, which prime number to chose (if any) and so on. This text can either be edited by double click, or both parts can be independently randomized with the two random buttons below.

In other words: Protoverb is a data mining concept. Instead of spending a few months ourselves, we hope that our community will come up with great settings. As a reward, this plug-in is free, people are encouraged to share their settings and thoughts on the internet, and at some point we’ll draw some prizes (details to be announced in January 2016) from the submissions (we’ll always draw the first entry of equal submissions, so you can share without fear!)”