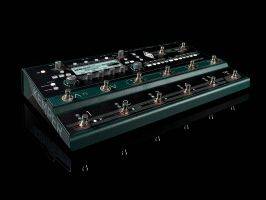 KEMPER PROFILER Stage™ is no mere accessory — it is a complete PROFILER. A multi-effects powerhouse and state-of-the-art guitar amplifier (NOTE: no power amp included), featuring KEMPER’s unique PROFILING™ technology for capturing the sonic DNA of any guitar amp. It also comes preloaded with a PROFILE™ pool of hundreds of the best guitar amps in the world, created under perfect conditions in professional studios worldwide.

This combination of PROFILER and Remote allows you to control, administer and program your Performances, as well as manage Rig switches and complex parameter morphs, all in an unparalleled intuitive manner.
The illuminated sunlight-proof display, which increases display contrast even with the sunlight’s intensity, is designed to be viewed from any distance, under any lighting conditions, and the housing is built like a tank. Just what the doctor ordered for touring musicians on dark stages or sunlit outdoor festivals!

Five buttons allow direct access to five different Rigs per Performance — tap once to select the Rig, and tap again to trigger a morphing. Entire Performances can be switched using a bank system.
Four Effect Buttons can be assigned individually per Rig. Use these to toggle pre- and post amp FX, either singly or in groups, as well as Action & Freeze functions such as Delay Infinity. Setting them up is easier than putting a new contact into your cell phone: click Effect Button, choose FX, assign, done.
Dedicated buttons control Tuner Mode and Looper, as well as trigger Tap Tempo or other assignable functions.

Up to four expression pedals can be connected to control continuous parameters of the sound. Alternatively, external switches can be connected for even more toggling functions.
The PROFILER Stage™ features dedicated Stereo Monitor Outputs for driving two either full range or standard guitar cabinets (NOTE: no power amp included) simultaneously and independently from the direct stereo feed. Two stereo effect loops with stereo returns for each allow for connecting both pedals and outboard studio effects.