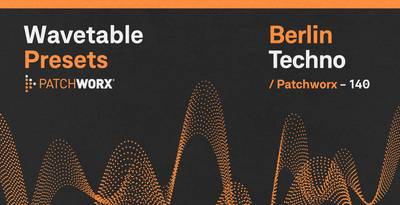 This is a vigorous set of expertly crafted experimental techno sounds that can be utilised to bring unique energy and vibes to any dancefloor. This collection has been lovingly put together 100% royalty free to give you unrivalled confidence that your tunes are ready to play out in basements across the globe.

Each individual sound features macro controls, ensuring your sounds are as diverse and evolving as possible. What’s more, the use of instrument racks means each preset has been carefully post-processed for maximum effect.

This boosted Patchworx pack comes complete with not only 64 custom presets but 64 MIDI files and 64 Wav rendered versions – fusing the patches with their associated MIDI files for instant audio inspiration and manipulation.

The Patchworx series are brought to you by Loopmasters and are a creative resource for producers who are looking to produce and perform their own musical parts, using genre specific sounds which have been designed by experts in their genre.

Patchworx titles are easy to download and install, and full instructions and support are available. Create, inspire and perform with Patchworx – sound ammunition for your next production!

Please ensure you have the latest version of Ableton Live & Wavetable before ordering.