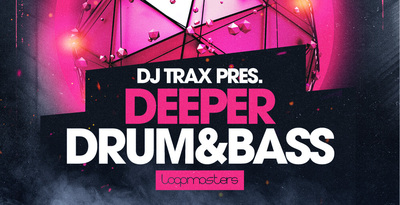 DJ Trax started Drumming at 7, DJing at 12 and at 15 he formed the hip hop group Mixrace with two MC`s (Dev Paradox + Leke Aerosoul). Trax released his first track a year later (1991) on Brain Records alongside DJ Raw. In the same year Trax and Dev signed to Moving shadow. Over the next 3 years he released Solo 12″s on Shadow under DJ Trax and Joint releases under Mixrace.

In 94 Trax + Paradox set up 5 record companies with Scott W and Gary S Stronghold, Mixrace Productions, Offset, Nautilus + Mobhanded. They released a couple of dozen 12″s on the labels, both solo, and duo (under Brown + Dangerman.) Trax + Paradox also collaborated with Hyper On Experience on Stronghold + Timeless. In the 2000s, Trax went onto produce a further two albums 1,000 Pictures + Thoughts In Widesceen which was on the front cover on Knowledge Magazine.

Alongside these releases he has also written music for many TV/Multimedia projects and scored for the feature film Shifty. He also has a bi-weekly radio show with Nucleus called ‘Catch a Groove’ He has DJ`d in many cities across Europe and run nights throughout this time.

Deeper Drum & Bass contains well over 750 MB of content. Trax went all out recording 135 variation drum loops, resulting in limitless possibility for breakbeat chops and edits inside. You’ll hear thick atmospheric pads, gorgeous keys, chest-rattling sub bass, thick horns, phat synths and so much more, all ready to colour in your drum & bass creations and take your studio inspiration to the next level.

With loops playing at 170bpm, this collection is perfect for drum & bass, jungle, liquid drum & bass and many other high tempo rave music styles.