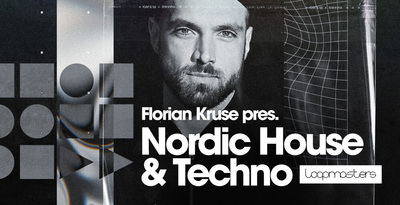 Loopmasters are proud to present Nordic House & Techno from dance music aficionado Florian Kruse! Everything within is 100% royalty free, straight from Florian’s vast collection of hardware and equipment to ensure your arrangements are full of interesting sonics.

There aren’t many people that can say that they have devoted their entire life to electronic music, Florian is most certainly one of them. DJ, producer, lecturer, plus label owner? Yes, Kruse has ticked all the boxes.

His passion for music began in his hometown in Northern Germany. An avid reader of Frontline magazine, and later the Raveline, his love for electronic music was born at 14, when he bought his first turntable. Early influences included legends such as Moodyman, Herbert and Steve Bug. At 16, Kruse invested in his first sampler, a mixer and a keyboard. With music in mind, he made the natural migration to Hamburg in 2002, where he studied Audio Engineering, and later taught at SAE.

Long time in the game, he started his music career in 2007, with his first vinyl release on Stokholms, Heya Hifi. Since then, Kruse has only grown as both a producer and a DJ. With Stel Vassiloudis and Nils Nuernberg, he became project Wiretappeur, with releases on Bedrock and a remix for label head honcho John Digweed. Nils Nuernberg quickly became his partner in crime, and together became the production duo Kruse & Nuernberg, their hypnotic Deep House sound making appearances on Liebe*Detail, Exploited, and Rejected. In 2008 they started their own label, Save Room Recordings.

A focus on his own productions, Kruse plunged into a solo career with a release on Anjunadeep, working together with his older brother Vincenzo and one of his long time idols Lisa Shaw. Followed by releases on Kompakt, Last Night On Earth, Noir Music, Poker Flat Recordings, Stil Vor Talent, Joris Voorn’s GREEN imprint, and Suara to name a few. Florian’s music got remixed by Noir, Eagles & Butterflies, Joris Voorn, Pleasurekraft, Coyu, David Morales and the list goes on. After a couple of feature tracks with singer / songwriter Hendrik Burkhard Florian also started a side project presenting ‘TheGround’ with an album (Dediction) in October 2017 and a live tour.

Nordic House & Techno contains some of Florian’s best sonic work, with an emphasis on musicality and analog warmth that will bring something unique to your mixdowns. Thick synths, phat basslines, grooving drum loops, heavy kicks, snappy snares, complex arps and much more are all included and ready for use out of the box! Loops included play between 121-127bpm, making this collection perfect for any house & techno genres you’re working on, including tech house, melodic techno, deep house and many more.