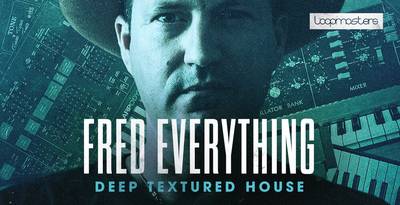 
Loopmasters are proud to present Deep Textured House, the second sample pack installation from French Canadian house music legend Fred Everything! Discover the key sounds in Fred’s current palette, all 100% royalty free and ready to help you kickstart your next track.

Fred Everything is a key player in the world of House Music with two and a half decades in the music business and a discography of more than 250 releases to his credit. Born in Hull and raised in Quebec City, Fred caught the bug early for electronic music in high school, working summer jobs washing dishes to buy his first synths.

His first releases came out on labels such as DIY (UK), Vinyl Peace and ultimately 20:20 Vision, which launched Fred’s career in the UK and worldwide. He relocated to London in 1999 to complete his first LP, “Under The Sun” (2000) and expand his touring territory. Considered a breath of fresh air by the press worldwide album, the album established Fred Everything as a name (an artist?) to watch. The album was licensed to Virgin in Vienna and Tiga’s Turbo Records for North America and featured a video of the single “Revolution”. His follow up LP, “Light Of Day” (2004) also on 20:20 Vision, was cited as the best House album of the year by DJ magazine (UK).

Successful in the licensing department, Fred’s productions have appeared on over 150 compilations worldwide by various artists such as Danny Tennaglia, Steve Lawler, Pete Tong, H-Foundation and Miguel Migs on labels like Fabric, Defected, Ministry of Sound, NRK, Universal and countless Ibiza compilations. His music was also used heavily for shows on MTV and was licensed to Virgin Airlines for their onboard entertainment system.

As a DJ, Fred has been a fixture in clubs worldwide, with his unique energetic style of mixing and ability to play with styles. He’s held residencies at SONA, Stereo and Salon Daome in Montreal as well as Next Door (Honolulu), Footwork (Toronto) and regular spots in places like Fabric (London), Smart Bar (Chicago) and Mighty (San Francisco). With over a million miles flown throughout the years, he’s played just about everywhere in the world with regular tours in Europe, Asia, Australia, North America, playing in cities such as Tel Aviv, Moscow, Istanbul, Sao Paulo and Dubai.

2020 Marks marked a year of milestones as he celebrated 25 years since his first release and 15 years of Lazy Days and showing no signs of stopping. With recent collaboration with House legend Robert Owens to forthcoming releases on Kerri Chandler’s Madhouse, Atjazz Record Company, Yoruba and Lazy Days. He’s also been hard at work teaching classes at IO Music Academy in LA as well as doing private mentoring sessions with students all around the world and writing for blogs such as Bolting Bits and Music Is My Sanctuary and UK legendary fanzine FAITH.

Deep Textured House contains well over 500 MB of high-spec audio tools, fresh from Fred’s vast collection of top-level hardware. You’ll hear beautiful and thick synthetic leads, pads and chords, with a warmth and phatness that will colour your mixdowns in with an addictive aesthetic. Booming kicks and smooth basslines will fill your sub frequencies with energy and interest, whilst your rhythm section can be developed in record time using the top loops, hi-hats, electric percussion samples, and snares. Tempos included range from 110-126bpm, making this collection perfect for deep house, melodic techno, midtempo and many other dancefloor genres!