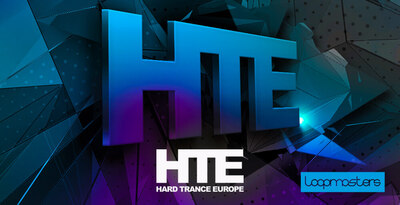 Loopmasters are proud to present Hard Trance Europe! This collection comes in collaboration with the titular label, giving you access to the biggest and highest quality hard trance sounds on the market – all 100% royalty free.

With now over 150+ releases from the world’s hottest Hard Trance talent, Beatport Top 40 label Hard Trance Europe has formed a solid and go-to platform for fans of the tougher end of the trance music spectrum. Not only with their regular releases, but with electric events held at European hot spots such as Fabric London, Fire London, Captured Festival Ibiza and of course their recent Hard Trance Europe Weekender, held in the heart of south west England. Since inception 5 years ago, HTE has achieved so much in such a short space of time, and we are extremely pleased to be bringing the first-ever Hard Trance Europe sample pack to Loopmasters.

Brought to you by HTE mainstays Lab4 and Nick The Kid, who not only give first-time access to their own personal sound libraries, but have also created bespoke and exciting content for the next generation of harder-trance productions. Hard Trance Europe boasts over 800 MB of Hammer Kicks, Aggressive Perc Loops, Heavily FX’d Acid Patterns, Inspiring Melodies, Fat SFX, Raw Individual Sounds and so much more. Ready to drop straight into your next project, all sounds are available in various audio formats and carefully crafted at an accessible 138-140bpm.

Lab4 – Not many can lay claim to having their name physically etched into the Roland Hall Of Fame, or being requested by the late John Peel for a special TV studio feature, Lab4 can! Bursting onto the scene in ’94 and going onto to cement a reputation as No 1 Live Global Hard Dance act ever since. With over 500+ productions to his name, Les Elston continues to drive Lab4 forward in 2022, and we are sure his first appearance and contribution at Loopmasters will massively excite producers of higher-BPM Hard Trance, NRG and Freeform worldwide.

Nick The Kid – flying the flag for European Hard Trance since ’99 through his long standing event Hindsight, the previous Hard Dance Award winner has been outputting music since 2001 on some of the biggest labels in Europe. During this time Nick has also appeared globally at clubs across Asia, Australia, the UK and Europe, consistently pushing the tougher end of trance music within his sets, productions and events. Nick’s studio is constantly in use with part of his day Job engineering music and projects for a whole host of industry clients and friends, so we are very excited to be bringing you this fresh production arsenal from this long standing ambassador of the sound.