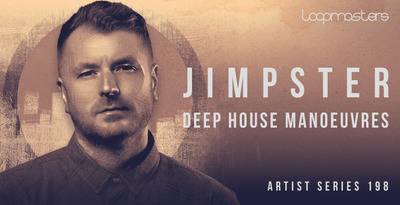 
Loopmasters are proud to welcome Jimpster to our artist series! Deep House Manoeuvres is Jimpster’s first official sample library, and long-time fans will not be disappointed with this gorgeous debut. Expect a massive reinforcement to your audio tools with this 100% royalty free care package.

Producer, DJ, remixer, label boss, taste-maker. Jamie Odell wears many hats and wears them well. Under his Jimpster alias, he has become one the most revered deep house artists operating on the scene today. From his UK base, Jimpster has inadvertently become a standard-bearer and custodian of the authentic house sound, and carries this flag to the four corners of the world.

Despite early releases dating right back to 1991 on Jumpin’ & Pumpin’, it was his seminal debut LP ‘Messages From The Hub’ which established Jimpster as an artist of note back in the late 90’s. This LP brought critical acclaim and invites for collaborations and remixes for artists as diverse as Coldcut, Kirk Degiorgio, Lamb, Airto Moreira and Bob Marley. The music has flowed steadily and consistently since then, mostly on Freerange, with the 2006 excursion ‘Square Up’ on Ben Watt’s seminal Buzzin Fly label proving to be a (temporary) transfer of one London-based deep house icon to another.

2017 proved to be one of his strongest yet with his Silent Stars LP dropping in April, remixes for Adam Port and Kerri Chandler causing serious damage and his Step By Step track for Suol appearing in countless charts and holding the top spot on Traxsource for months. More recently we’ve seen him dropping serious heat for the dance floor in the form of Burning Up as well as a huge remix of Bawrut’s More Cowbell. His One EP from February this year proved he still has a knack for delivering dance floor gems with a soulful touch receiving love from the likes of Jamie 3:26, DJ Spinna, Osunlade and Opolopo to name a few.

With Jimpster still doing the business at globally renowned hotspots like Output (New York), Womb (Tokyo), and Watergate (Berlin), a slew of new music on the way including a new LP and with almost three decades of experience to draw on, we see clearly that the fire is still burning as brightly as ever.

“This is my first attempt at a sample pack and I found the process a lot more enjoyable than I was expecting! The first step was to decide on what to include which I based on what I personally like and dislike about sample packs and what I feel would be most useful and inspiring to the user.

I often get asked what helps define my production sound and I feel the combination of Fender Rhodes, Juno106 and Roland TR808 play a key part in my own sonic palette so I wanted to include plenty of chords, stabs, musical loops and rhythms from my favourite hardware machines. I also wanted to focus on producing a lot of rhythmic top loops, i.e percussion, hihats, claps, all programmed and recorded with a live, organic feeling to capture that looseness which brings life to a groove.

On some of the drum and percussion sounds you may find a little space at the start of the samples which is intentionally edited that way to give that extra bit of ‘air’, helping to get away from an overly quantised feel. Rather than producing complete ‘kits’ of loops which all fit together in key to effectively produce a ‘complete’ snapshot of a track, I’ve produced a larger variation of musical loops including stabs, filtering arpeggios, deep pads and strings so you can find inspiration and then tweak and edit to make something fresh and unique.

Have fun with the sounds and I look forward to hearing how they can play a part in your own productions!