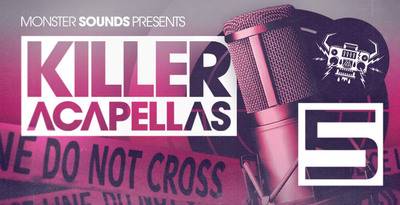 
The fifth entry in Monster Sounds’ ongoing series of original vocal sample libraries is gives you a wealth of production options, whether you’re looking to build a complete vocal from the ground up, or you just want to add a certain lyrical something to take your latest tune to the next level.

Comprising a comprehensive set of vocal tracks organised in six full songs, Killer Acapellas 5 is well suited to a wide spectrum of contemporary genres, from pop, house and trap to future bass, DnB and beyond. The two vocalists behind the recordings – one male, one female – are professional singer-songwriters who have worked with many renowned producers and artists, and written top lines for various major label talent. The production team at Monster Sounds, meanwhile, have also top-lined, produced and engineered countless vocal sessions, from up-and-coming underground talent to gold-selling commercial acts. For the production of Killer Acapellas 5, they captured the singers using a 1980s Neumann U87 mic fed into a Focusrite ISA430 channel strip, for a rich, warm, up-front sound. Rest assured, these are pro quality vocals in every sense.

Maximising the flexibility of the pack, each of the six full acapellas is based on a different song idea and lyrical concept. Every one centres on its all-important Verse and Chorus ‘Sections’, which are supplemented with Bridge, Adlib, Coda and/or Pre-Chorus Sections, giving you the freedom to manipulate and rearrange the full song, or plunder discrete parts of it for loops and samples. Each Section consists of a mixed combination of double- or multi-tracked vocals and harmonies, in both ‘Dry’ and effects-processed ’Wet’ versions, ready to drop straight into the your project; and individual stems are also included for setting up your own vocal mixes or stripping the sound back to its raw essence.

Taking in a broad range of keys, tempos and styles, Killer Acapellas 5 is an inspirational vocal tool kit guaranteed to take any producer’s instrumental tracks to the big league.