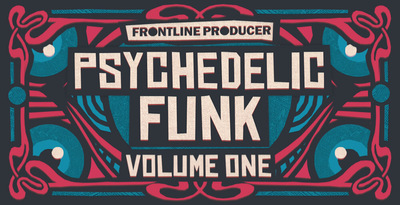 Frontline Producer are proud to present Psychedelic Funk Vol. 1! This 100% royalty free collection of unique and beautiful samples was recorded and produced by Andy Baker, drawing from influence from a wide range of sources – resulting in a sample pack that totally stands out from the pack and sounds like nothing else out there.

Psychedelic Funk from Frontline Producer was inspired by contemporary artists such as Khruangbin, Elman Namazoglu, John McLaughlin and Adrian Belew amongst others, encompassing bilateral ethno musicographical genres from east and west disciplines. You’ll hear unfamiliar archetypes from European, Middle Eastern, Indian and South East Asian regions; however the backbone of the music is crucially made up of funk, soul, R&B and rock orientated music. There are electric guitars, live drum loops, electric bass grooves and twisted SFX inside.

Psychedelic Funk is packed with unconventional non-western theory, such as Melakartha and Thaata rāgas, double harmonic minor, harmonic major, synthetic modes and chromatic scales; all of which have been incorporated into the included construction kits. Lastly, vintage funk, funk/rock, avant-pop and fusion sounds have been used to form the foundation and rhythm parts. Furthermore, live jazz/funk drums and electric 5 string bass guitar was employed to provide a substructural groove

At tempos between 88-134bpm, this collection is perfect for funk, rock, world music and any other live instrumental genres that could benefit from some experimental vibes!

Log in to download a free taster pack, and check out the specs and demos to find out more! This collection is also fully Loopcloud ready. More information can be found about Loopmasters award winning software here: loopcloud.com