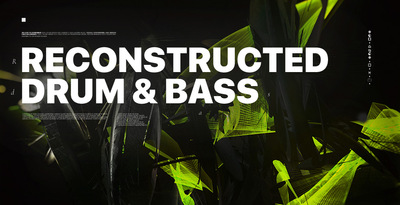 Mask Movement Samples and D-Struct are excited to present ‘Reconstructed Drum & Bass’ – an original collection of sounds, beats, and building blocks for making music, especially Drum & Bass and similar genres with broken beats and filthy basslines. This sound pack acts as an organized system for writing, crafting, and adding flavor to productions that call for a modern intensity and a sound design-focused approach. Artists and producers of any genre will find inspiration from the depth and variety offered. D-Struct is a stateside Drum & Bass producer and former member of the group Robot Death Squad and Identity. He’s known for his own style since the early 2000s, his music can be found on famous D&B labels, such as Moving Shadow, Dispatch, Barcode, Nerve Recordings and more.

Many of the sounds highlighted in this collection are from synthesizers of various pedigree. It includes a mixture of analog, digital, and modular gear spanning several decades. Recordings of physical objects and spaces also appear, with most being altered and reprocessed beyond recognition. Creatively, this library can also act as a collage or set of mood boards which represent moments of emotion, color, resolve, and interest.

The loops and material have been carefully composed, processed, and refined with an intuitive nod towards the science of sound. Chasing tone, vibe, and atmosphere are lifelong pursuits for many musicians and producers, and this project is no exception. To make this body of work a reality, D-Struct brought out many of his favorite techniques, using a hybrid of digital and analog equipment like his E-MU sampler, rack processors, vintage mixing desk, guitar pedals, and many other bespoke effects collected over the years.

Getting to the numbers, ‘Reconstructed Drum & Bass‘ spans well over 900 MB of content. It includes 35 atmospheres, 80 bass and synth hits, 49 effects and risers, 89 music loops, and over 170 drum and percussion loops.