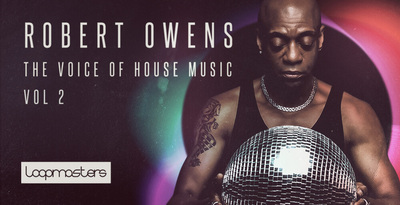 Loopmasters are proud to welcome back the legendary Robert Owens for the second instalment of The Voice of House Music! This brand-new collection of top-tier vocals follows on from Robert’s hugely successful first outing, and Volume 2 ups the ante even further.

In his own words, Robert Owens has been making house music ‘before house had a name’.

One of the most distinctive, coveted and prolific voices in the genre, Robert has an illustrious career that started in late 80’s Chicago and has produced some of the greatest tracks house music has witnessed. Responsible for era-defining classics such as ‘Tears’ alongside Frankie Knuckles & Satoshi Tomiie, ‘Bring Down The Walls’ with Larry Heard as part of Fingers Inc., as well as solo releases ‘I’ll Be Your Friend’ and ‘Mine To Give’ which hit number one on the Hot Dance Music / Club Play chart, Robert has created seminal records which you can comfortably bet will have a place on any house head’s all-time favourites list.

After setting the standard during house’s formative years, Robert has remained at the forefront of the genre, releasing on labels from Ninja Tune and Boysnoize, through to Circo Loco and HE. SHE. THEY, building an extensive discography of solo projects, as well as a catalogue of collaborations which reads like an electronic music hall of fame – Masters At Work, Jamie Jones, Soul Clap, Coldcut, Roy Davis Jr., Marshall Jefferson, Catz ’N Dogz – the list goes on.

What has set Robert apart throughout all these releases, is the raw emotion and passion he delivers into each and every vocal take, providing an uninhibited human touch to everything he works on. Lyrically too, we see an artist who is unashamed in his commitment to spreading the positive values of house music as a medium for self-expression, inclusivity and spiritual liberation.

Robert’s unique live performances continue to deliver this message, spellbinding audiences across the world with distinctive DJ sets embellished by his live vocals – a format which pays testament both to his talent as a singer, and his extensive depth of musical knowledge and selections.

After over thirty years in the game, Robert’s energy in the studio is also seemingly unlimited, with the house music pioneer busy creating a prolific release schedule, including collaborations with electronic music luminaries such as Damian Lazuris, Mark Knight, Gina Breeze (Homoelectric) and Alinka.

Containing over 950 MB of pure, stunning vocal work, The Voice of House Music Vol. 2 is made up of 8 previously unheard Robert Owens songs. You’ll hear vocals of all kinds, from chorus vocals to spoken word, from verses to ad libs, bridges, phrases and vocal FX. Bring beauty, humanism and unforgettable hooks to your tracks with Robert Owens’ latest and greatest sample library!

Loops within this collection play between 89-130bpm, making it perfect for adding vocals not just to your house & techno productions, but downtempo, disco, hip-hop and more too!