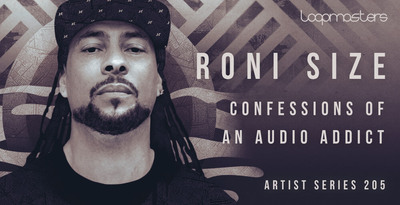 Loopmasters are proud to present Confessions of an Audio Addict from the legendary Roni Size! This collection draws from Roni’s love of beats and bass through multiple eras, giving you 100% royalty free access to the sounds of one of the UKs most important dance music figureheads.

From Bristol youth club parties, through the white heat of rave and the founding moments of jungle and drum’n’bass, to transforming underground electronic music into something that could be played by a live band on the biggest arenas and festival stages, he has at each stage created completely afresh – not just a sound or style but an entire methodology of how music can be made. And each time, that new creation has reflected his heritage, his surroundings and the precise moment in which he’s operating.

20-years ago, The Mercury Prize win for his ‘New Forms’ album brought D’n’B to the forefront of dance-music news, making even the rest of the industry – where reactions had up until that point been bemused – sit up and pay attention. For several years thereafter Roni and team were on top of the world, succeeding as solo artists as well as a collective, maintaining underground credibility yet receiving Brit awards and even collaborating with some of the biggest names in hip hop.

Roni has also worked on huge collab track “Calling” with Rag n Bone Man, which was selected as the “sound of summer” by Sky Sports and broadcast repeatedly across their channels. Roni appeared on BBC TV as well as regularly on radio and had his music chosen by Virgil Abloh to curate the designer’s Off White runway shows.

He continues to be in high demand with the world’s best festivals and events and a run of sold out exclusive headline dates with LTJ Bukem in 2021 has already caught the eye. With brand new Roni music scheduled for ahead of some special announcements coming soon, Roni shows no signs of stopping!

Confessions of an Audio Addict is packed with 1.24 GB of Roni Size’s cherished sounds. Self-described ‘Roni’ breaks are included in abundance, ready to bring your rave rhythms up to scratch in an instant. Deep, junglist basslines make up the core of the collection’s low-end science, perfect for crafting sound system workouts of the highest calibre. The included synths, guitars, pads, bells, and vocals are perfect for filling your arrangements with jazzy melodies and colour, and you can complete your arrangements using the included enveloping SFX samples.

Loops within play between 170-176bpm, making this collection perfect for all subgenres of drum & bass including jungle, liquid, rollers, dancefloor, jump up and more!