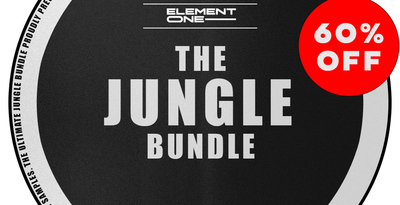 Element One proudly presents The Jungle Bundle. This versatile collection includes our 4 best-selling jungle packs, whilst also including our Bass Music Vocals & FX pack to bring you the magic of the MC for your jungle breaks.

Within this bundle you’ll find the following packs:

Element One brings you the sound of 1996 jungle. This pack is an ode to the original heads who pioneered the sound of jungle in the ’90s. The pack draws from the sound palette of legendary artists such as Photek, Source Direct, Dillinja, and Goldie. Expect raw and tight drum breaks, deep basslines, nostalgic melodies, cerebral FX, and so much more.

Element One brings you its second venture into the sound of 1996 jungle. This pack is an ode to the original heads who pioneered the jungle sound in the ’90s, drawing influence from the likes of legendary producers such as Photek, Source Direct, Doc Scott, Dillinja, and Goldie.

Element One brings you the sound of 1994 jungle – the peak year of jungle music, when legends like Fabio and LTJ Bukem were fuelling the raves, and pushing the jungle sound forward.

Element One proudly presents Modern Jungle – a fresh and contemporary venture into the sound of jungle music, inspired by artists such as Tim Reaper, Coco Bryce, Sully, Dwarde, Moresounds, FFF, and Dead Man’s Chest. This diverse sample pack features an extensive collection of both loops and one-shot samples locked in at 160 BPM, all prepared to drop into your next jungle, drum and bass, halftime, or breakbeat production.

Drawing inspiration from the legendary sound system culture of Jamaica, this pack captures the magic of the MC. This pack is full of high-calibre vocal samples for scattering amongst any reggae, dub, dubstep, drum and bass, jungle, grime, and dancehall production. As well as vocal samples, this pack also delivers an eclectic mix of FX samples to add a real experimental ‘dubbed out’ sound to your production with valuable ear candy. All loops and one-shot samples within are 100% royalty-free.

Available now with a weighty 60% off!

All these sounds are downloadable in HD WAV at 44.1kHz and 24-bit. All are tempo-labelled so you can explore these with ease.