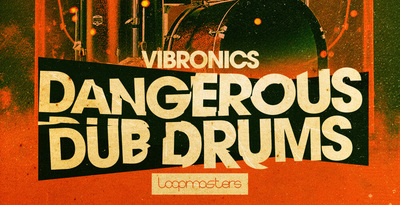 Loopmasters are proud to present Dangerous Dub Drums by the mighty Vibronics! This collection is packed with no-nonsense dub sonics, designed with care and passion for use in your music 100% royalty free.

Vibronics, the future sound of dub, have been vibrating the world with bass since 1996. Their music is at the forefront of the UK Dub scene, proven by over 70 releases on their own legendary SCOOPS label as well as a host of albums, singles and remixes for a myriad of other labels such as Universal Egg, Jarring Effects, Dubhead and Jah Tubbys . In the studio they have worked with Michael Prophet, Iration Steppas, Macka B, Aba Shanti, Brain Damage, High Tone, Big Youth, Gaudi and an almost endless list of dub & reggae luminaries. Wether dub-mixing live on stage, rocking the clubs or uplifting the festivals, Vibronics continue to perform tirelessly across Europe as well as in Asia, The Americas and the Caribbean.

Taking influence from the Jamaican dub originators Scientist, King Tubby & Lee Perry, but also their later British counterparts Mad Professor, Adrian Sherwoord, Disciples & Dub Judah, Vibronics are easily able to channel 100% authentic dub sounds and Dangerous Dub Drums is no different. All of the included drum sounds are layered to make each hit impact as much as possible. Saturation, EQ & limiting has been done in the box, but everything has been run through an ancient Allen & Heath mixer and some weird & wonderful outboard gear such as old-skool graphic equalizers, Pultec, & trident EQs and compressors from DBX & Chameleon Labs. You’ll also hear sounds being manipulated through 70’s spring reverbs and 80’s digital delays like the MXR, Bel & Korg. Everything has been monitored through a vintage PMC & Nryston set-up that uses a rare transmission line sub so there is maximum attention to detail in the low end.

Alongside drums, you’ll also hear keys, synths, bass and more across this weighty 500 MB+ care package. All loops within play between 110-175bpm, making this collection perfect for dub, reggae, jungle, dancehall and any other Jamaican-infused genres!