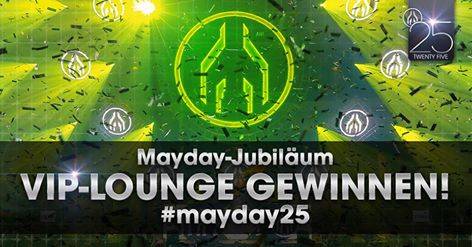 There are only round about two weeks left till the anniversery of MAYDAY will start. At the 30th April 2016, MAYDAY “Twenty Five” will be the extraordinary event for you in spring at Westfalenhall / Dortmund, Germany. There are more than 50 DJs and Live-Acts on five different floors which are waiting for you to celebrate an unforgettable night, like Robin Schulz, R3HAB, Gestört aber GeiL, Moguai, showtek, Blasterjaxx, Len Faki, Disco Boys, Cuebrick, Klaudia Gawlas and much more. Save your ticket right now and here:
MAYDAY – Tickets

Don’t miss the VIP-Lounge give-away. You have got also the chance for a free-entry, if you win a VIP-Lounge exclusivly for 25 people. You’ve got only time till 22th April. Read more about it right here:
MAYDAY – VIP Lounge