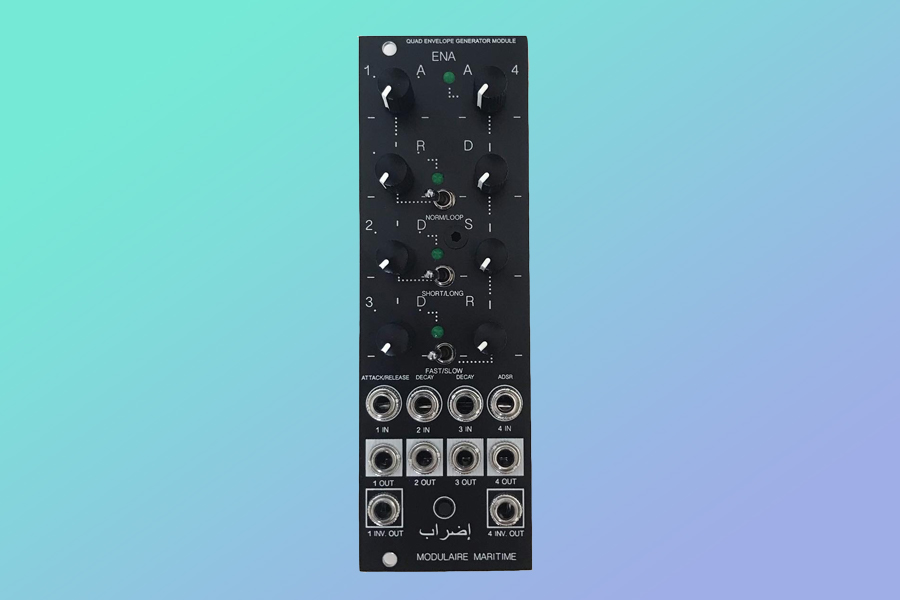 This is not a typical quad envelope though for polyphonic patches but consists of four different envelopes responding to different uses: Attack/Release, two different and independent Decay and one full ADSR. Module have additional functions like looping, different decaying times, speed, manual trigger and inverted outputs.

AR and ADSR envelopes are using logic chips (HEX Schmitt-Trigger Inverters, timer) and are pretty fast (less than1ms attack/decay time) therefore they suits well for sculpting tight basselines, fast gated sound motifs, percussive pads etc.- this above all when ADSR is set to “fast”. When set to “slow”, on the other hand, suits more for synth leads, drones, ambients, etc. The slowest time of this EG is a bit above 1s. “Loop” function of AR envelope allows to be used as a low impact LFO, for “light”, shallow modulations. The loop’s rate and cycle duration is set by inter-dependent settings of Attack and Release knobs. AR and ADSR responds to gates. Those two have also inverted outputs which is useful for some revers modulations or for typical use with compressors to obtein “ducking” effects.

All four envelopes are “normaled” one to another so if only one input is used all four will fire until the another input is used who will brake the “normalisation” and so on. Also all four EGs can be triggered manually via “hit” (or “strike”) button (in Arab).

Two decays have different decaying times settings: on the first one this can be selected via dedicated switch: “short” or “long”. This suits for more “embodied” envelope shapes for percussions for exemple. The second one is set for even shorter decays and can be set to longer (even longer than the first one) by placing jumper on the second position situated on the back of the module. Both decays can be set, also via jumpers on the back, to respond to gates or triggers.

The peaks of EGs are between 7 and 7.7V, on the AR envelope is less (this one can be set to hit much harder via trimmer on the side but will have some output offset, setting it higher this offset won’t be inconvenient if you count to use it with exponential VCAs for some aggressive percussions for eg. but might be, for certain purpose, when used with linear)