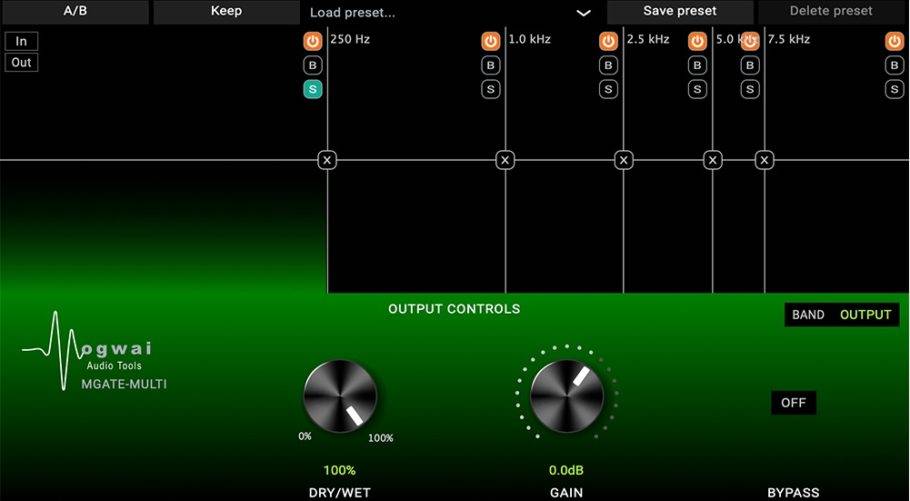 A new flexible multiband gate plugin with visual controls has been released by Mogwai Audio Tools for free. It offers up to six bands of separation. Each band has got the following functions:
Add/remove frequency bands by hovering over the top of the visual display until a ‘+’ button appears. Click on this button at the desired crossover location. A band can be removed by clicking on the ‘x’ button on the crossover that appears before the band to be removed.
LOOKAHEAD can be activated to add a small amount of delay to the sidechain signal to deal with fast attack signals.
Adjust the gate by using the THRESHOLD, RATIO, ATTACK and RELEASE knobs. Adjust the output gain by using the GAIN knob.
Each band can be deactivated, bypassed or soloed by using the buttons at the top right of each band. Additionally, the frequency bands can be adjusted by dragging the crossovers in the visual display. Additionally, the output gain can be adjusted in the visual display. The A-B functionality can be used to compare and select desired settings. A good selection of presets are provided as a starting point.
Additionally, the plugin has a few factory presets. These are starting points to craft your own creations.

Additional features:
Global output controls including gain, wet/dry mix and bypass. Use the ‘BAND|OUTPUT’ toggle to switch control views.
Compare and select desired settings by using the A-B functionality.
A selection of presets are provided as a starting point.