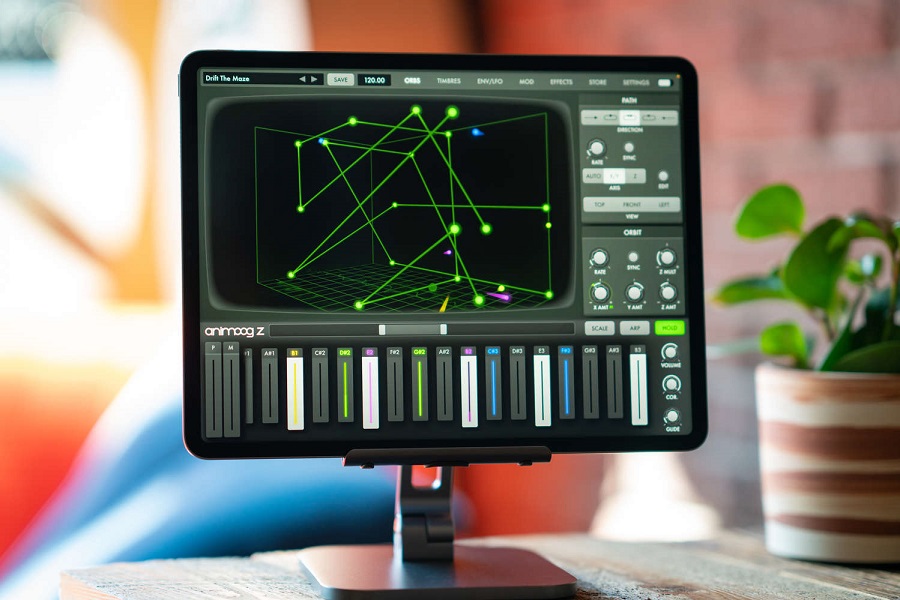 The next professional synthesizer for iOS and macOS.

Powered by Moog’s Anisotropic Synth Engine (ASE), Animoog Z empowers you to visually traverse new sonic universes and even create your own! ASE utilizes a novel orbit system to expand the concepts of wavetable and vector synthesis, allowing you to navigate dynamically through the X, Y, and Z axes of sound. Sound design with Animoog Z is immediate and intuitive—simply select and drag the orbit path to explore endless sonic configurations.

Animoog Z captures the immediate and intuitive experience of Moog synthesizers and applies it to the modern digital paradigm, enabling you to quickly sculpt incredibly fluid and dynamic sounds that live, breathe, and evolve as you play them. Use Animoog Z’s built-in keyboard to control pitch and pressure per voice (or send MIDI out), or connect your favorite MPE controller and explore Animoog Z’s MPE-compliant sound engine.

Animoog’s diverse library of timbres includes digital tones and spectral sources alongside analog waveforms captured from classic Moog oscillators (both vintage and modern), all run through a boutique’s worth of high-end outboard and analog signal processors. These include modular synth panels, Moog analog effect circuits, and more. If you ever run out of sounds, you can use the built-in Timbre Editor to record and edit your own timbres!

Visually captivating and sonically immersive, Animoog Z brings music production to the next level. Whether you are new to synthesis or a professional musician, Animoog’s unique user interface gives you the power to easily create a visually vibrant and sonically rich universe.

Animoog Z is available on iOS (iPhone, iPod Touch, iPad) and macOS (Intel and Apple Silicon) with full support for AUv3 for connecting to other audio apps such as GarageBand and Logic. A VST3/AUv3 wrapper is available for plugin integration with DAWs like Ableton and Pro Tools; the plugin versions can even be used as effects to process sound or record timbres from other plugins.