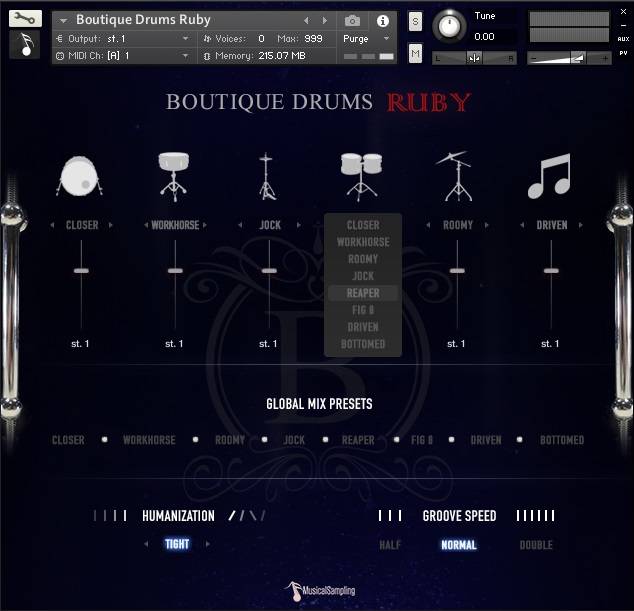 Ruby is the first release of our Boutique Drums series. It began when we asked a bunch of our producer/mixer buddies what they were looking for in a drum library and it always came down to two things: Keep it dirt-simple to use and have the sound banging right out the gate.
We consulted with our drummer Brian Scoggin (Casting Crowns) who curated a rock kit comprised of truly boutique drum pieces for Ruby. We also chose to record at Hey Hey Studios in Griffin, Georgia for it’s outstanding acoustics and engineering; a remarkable space providing a tasteful balance of both room and character.
To address the calling for simplicity, we created a single-page interface that offers a fast and intuitive way to develop customized drum mixes. We’ve included eight different “baked-in” mix presets that were designed to not only work on their own, but are completely interchangeable between the different drum groups.
Each of the eight mixes were created from scratch using an arsenal of processing tools, both hardware and software. We chose to develop the presets outside of Kontakt to deliver what we felt were precision mixes with the right amount of punch, balance and vibe while providing just enough headroom to treat well to additional processing.
Under the hood, Ruby also alternates between two different sets of hi-hat/ride multisamples; depending on how quickly you hit successive notes for the given articulation. The initial hit triggers the isolated sample while subsequent hits trigger repetition samples.
We’ve included five different hi-hat states of multisamples and live eighth-note grooves that automatically lock to your DAW’s tempo: tight, normal, slight-open, mid-open and all-open; grooves recorded at 90/120/140 BPM.
We’ve also developed what we consider to be a first — crossfadeable hi-hat grooves with release triggers. With the modwheel down, it’ll play the loop at it’s tightest hi-hat state. As you push the modwheel up, the hi-hat opens up. It’s pretty dang cool.