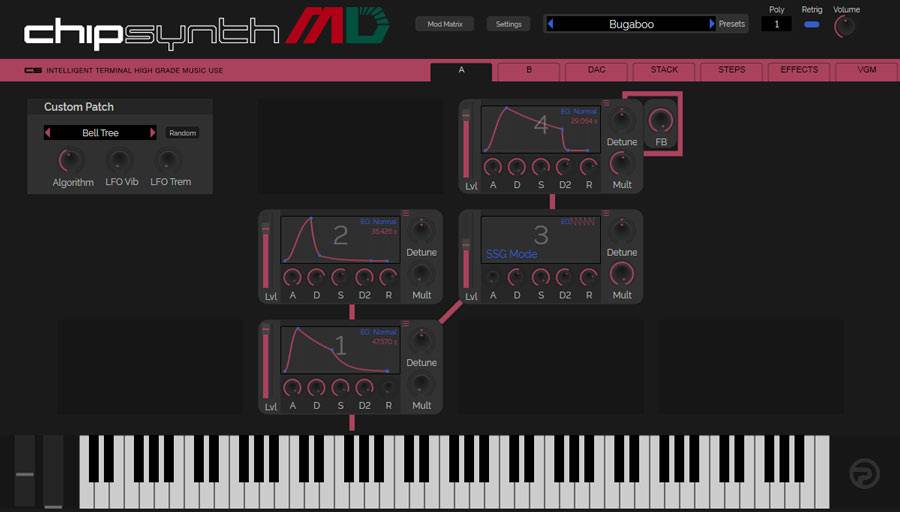 The Mega Drive™ – also known as Genesis™ – is a much beloved console system that brought the bright and sparkly sound of FM to the masses. It resulted in the creation of numerous fast paced and exciting soundtracks, and it still drives the creativity of composers to this day.

As we designed chipsynth MD, we couldn’t help ourselves but to jam pack it with features that take it to the next level, with an access to every component of the hardware no matter how obscure, and an intelligent layering system that lets you turn any OPN2 patch into a monstrous ear-splitting 6-layer wall of sound!

MD features a bit accurate OPN2 (YM2612) emulator. We combined it with a SN76489-compatible square wave core (SPSG) and a special emulation of the very crunchy sample playback found in games, and we multiplied all of this by 6 to make it polyphonic in every situation imaginable. A complimentary VGM file player allows you to audition hundreds of vintage soundtracks just like they were meant to be heard.

Plogue’s reverse-engineering team worked very hard to make sure that even the rarest corner-cases involving the special features of the OPN2 chip were emulated bit-perfectly, backed by large amounts of testing on special hardware rigs. Add the DAC and impulse-response emulation to that, and you get a degree of realism that has never been reached before!