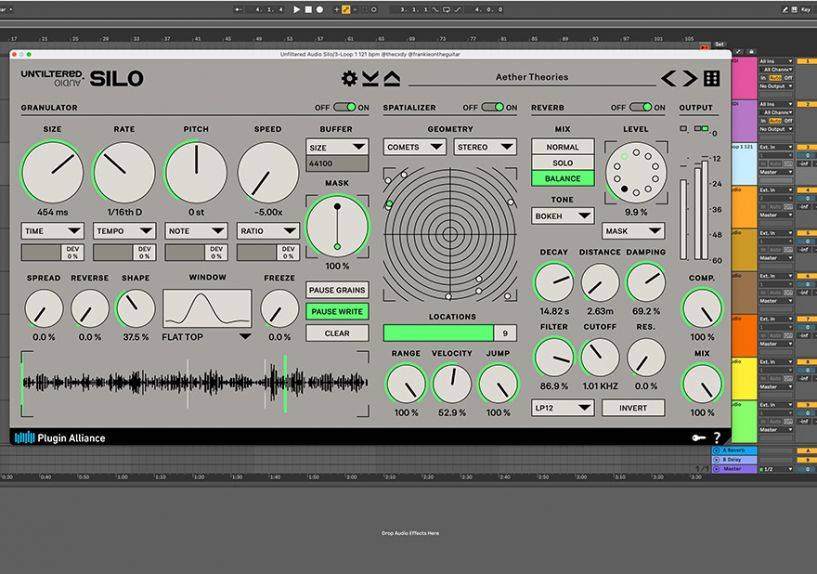 Reverb like you’ve never heard it before
Unfiltered Audio’s SILO is unlike any other reverb out there. Endlessly tweakable and just begging to be automated, it harnesses the power of granular processing for incredibly rich and even otherworldly reverb sounds you have to hear to believe.

Powerful for sound design and music production
SILO breaks up your incoming sounds into “grains”—incredibly short snippets of audio—which can be processed individually. You’re able to adjust the size, shape, speed, pitch, and spread of these grains, reverse them and process them separately using automated rules to create novel spaces and reverb effects.

Packed with presets and full of possibilities
This reverb is a tweakhead’s delight. If you like to play with knobs and see where they take you, SILO will quickly become one of your favorite plugins. You can adjust a half dozen parameters for grain generation and treat them using an array of distinct “movement” algorithms with colorful names like “Comets”, “Moons”, “Meteors”, “Stars” and “Shimmer”. For creating fascinating new sounds with a minimum of fuss, try the robust library of presets from top sound mixers and designers like Richard Devine.

Pan your sound in multiple dimensions
One of the areas where SILO excels most is in creating width and movement in what feels like a truly three-dimensional space. With modes that function almost like a multi-dimensional autopanner, you’ll hear your sounds swirling around you with depth, intrigue, and spatialization that it’s difficult to get from any other type of tool.

A distinct class of processor
Granular processing has been part of the sound design world throughout the 21st century, but only recently has it begun making bigger waves in the realm of music production. Unfiltered Audio’s SILO gives you some of the most control possible over the process while still retaining a straightforward and easy-to-use interface—perfect for music production and sound design alike. Use it to completely reshape synths, vocals, and percussion, subtly sweeten them or create entirely new sound effects for video and post-production.