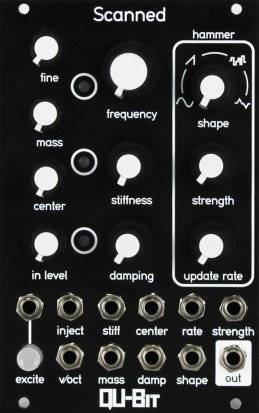 Qu-Bit Electronix released Scanned, an Organic Wavetable VCOScanned wavetable oscillator. It uses an unexplored technique known as Scanned Synthesis to animate wavetables that are created in real-time. This synthesis method was conceived by the father of computer music, Max Mathews, as the next paradigm in digital oscillators, and until now, has never been implemented on hardware.

The wavetables are dynamically generated from a set of “objects” tied together on a virtual string. These objects have physical properties including Mass, Stiffness, and Damping which affect the way that the string moves through space and time. Unlike physical modeling, however, this algorithm is a means of creating new electronic sounds, not replicating acoustic instruments.

To animate the waveform, the objects are morphed into the currently selected hammer shape and then released. This excitation of the sound generates evolving timbral landscapes that contain harmonic movement without external modulation. The hammer section also determines whether Scanned is a free-running oscillator, or a triggered sound source allowing it to function as a complete voice without additional filters or VCAs.