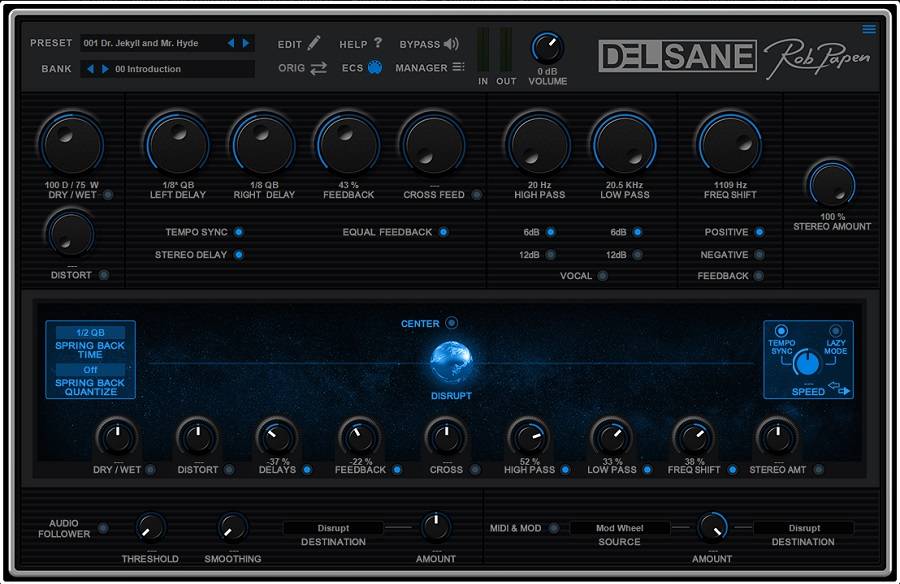 It is true that the amount of Delay FX available is like the number of stars in the Milky Way!
Looking at all these stars (Delays) can be overwhelming, so to keep your music production sane…we created DelSane, which is a lovely sounding Stereo Tape Delay FX plug-in with Dr. Jekyll and Mr. Hyde behavior. :D

So, for a sane-sounding, easy-to-use Stereo Tape Delay, you are spot on with DelSane.
Now, it would be insane if this – Rob Papen – product, wouldn’t have something special…something that you always expect from this brand. And YES… therefore, it is called DelSane, since you could imagine deleting the ‘Del’ and replace it with ‘In’. Because Insane types of Delays are possible with DelSane!
The ‘Disrupt’ parameter with all its features, allows you to think outside of the Milky Way in using Delays in creative ways! Dynamically changing Delays…without recording trillion parameters…by simply moving the ‘Disrupt Sphere-Slider’!
So, get sane and insane by using ‘DelSane’ in your music tracks, as Dr. Jekyll and Mr. Hyde would do in their music productions!