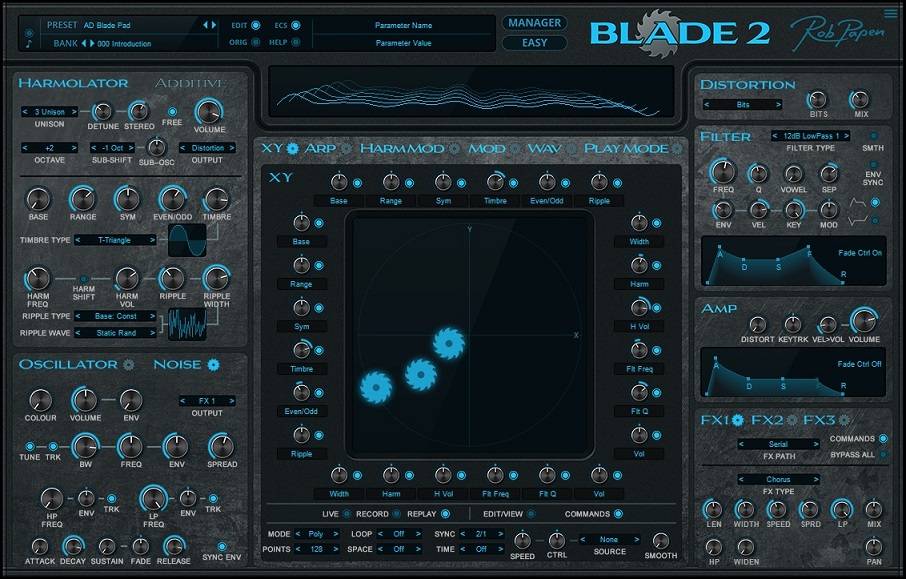 The original BLADE synthesizer released in 2012 had a unique concept in controlling the waveform harmonics (Harmolator) by using an XY pad. On top of that, the XY pad movement could also be recorded, edited, and played back tempo-based.
This concept of BLADE meant that you could generate some very different sounds, compared to regular subtractive and even additive synthesizers.

With BLADE-2 we have expanded the features of BLADE even further again making it a dream synthesizer for synth lovers who like to think out of the box and love to experiment!
Next to the Harmolator mode, we have now included an Additive mode which allows you to morph or mix between 4 additive waveforms using the XY pad. Of course, in addition to using these additive waves, you can also create and edit your own!
Another new addition is a dedicated wave-analyze section that allows to analyze of sample data into a waveform, which then again can be used in the Harmolator or Additive section.

To expand the sound options, even more, BLADE-2 also includes an additional analog-type oscillator plus a noise oscillator. However, it doesn’t stop there, because it now has 32 different Filter types to help shape your sound further!
The Arpeggiator section inside BLADE-2 has also received a huge update with some very cool new features.
There are now two additional rows for controlling the X and Y position of the XY pad. Also new is the ‘ratcheting’ feature including different ratcheting modes.

Last but not least, BLADE-2 has 3 Multi-FX processors with the high-quality top-notch – Rob Papen – FX.