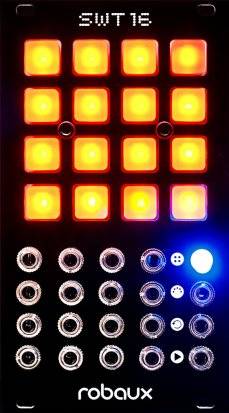 Robaux released SWT16, a 16-track trigger sequencer with up to 64 steps per track for eurorack.

The Robaux SWT16 is a 16-track trigger sequencer with up to 64 steps per track.
Programmable like a classic TR machine, the SWT16 can be used not only for triggering drum sounds, but also for Envelopes, S’n’Hs or resetting LFOs.
The SWT16 is polymetric – each track can have a different length, from 1 to 64 steps. Even more complex rhythms succeed with the individual clock divider per track.
The SWT16 has an intuitive user interface. All operation is via the illuminated 4×4 keypad. From the main screen, you can access the 16 different modes of the sequencer. The buttons adapt to the selected mode. With the back button, you can quickly return to the main screen.
Each track has its own trigger output. In addition, the triggers are also sent via MIDI notes (requires an adapter).